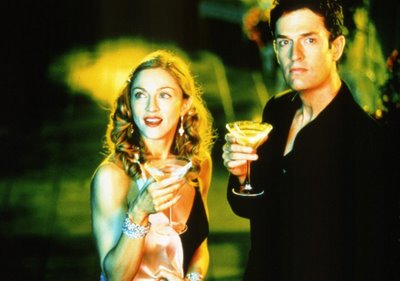 Owch! Rupert Everett has written a new memoir and he dishes on everyone in his life. He basically says Madonna is glamorous bitch. Not a total surprise, though plastic-surgery loving Rupert is a bit'o'cunt himself. Here is a big juicy exceprt from the book and some choice bits:

On her rudeness at a dinner party:

Madonna was approaching the dizzy pinnacle of fame, and at those heights you don’t bother to disguise your feelings. If she was bored, she let you know. Manners were something she discarded at base camp.

She didn’t seem comfortable with the older generation, like Tony (Richardson) and Candice (Bergen). She knew how everyone her own age reacted to her but anyone older looked at her from another angle and that scared her.

Madonna and Alek were only interested in each other. They were in the middle of their triumphant collaboration, Truth Or Dare, and after dinner they huddled in a corner talking on their cellphones, making high-flying Hollywood plans.

On Guy Ritchie vs. Christopher Ciccone:

This night marked the beginning of the end for Madonna and her younger brother, Christopher Ciccone. They had been inseparable in childhood and she had taken him with her to the material world, where he had provided a solid raft in the shark-infested waters.

He had a blunt, aggressive manner, and he often looked as though he was laughing at you, particularly when he was drunk, but underneath he was vulnerable and funny. To know her at all you had to know him. But he and Guy were from different planets, and in a way the one’s success relied on the other not being there.

Others were also on the way out. Guy was not particularly comfortable with queens, and so it was a last call for a lot of the disco bunnies and club-mix queens who made up the fabric of Madonna’s mantle.

It was a surprise, because Madonna came out of the womb blowing a disco whistle. But a whole aspect of her life was about to be hit by the delete button.

Julia Roberts appeared out of an explosion of flashlight, looking glossy and unruffled. ‘Hi, I’m Julia,’ she said with a huge smile. ‘I know who you are,’ said Madonna icily.

If you care, watch this recent video of Rupert talking about Mrs. Ritchie or their "duet" (cough) on "American Pie"
Posted by xolondon

Ooh, I might have to get this trash. Remember when Rupert was hot property for 3 minutes back in '97? Now he's probably sitting somewhere in a Coffee Bean bitterly crying over the "good ol' days" witih Anne Heche and Chumbawumba.

yes, it sounds like a fun read - i can't get enough of bitchy non-kiss and tells (i'm so white trash)

He certainly has a way with words, doesn't he?

He actually lives near me. Check this: http://www.dailymail.co.uk/pages/live/articles/news/news.html?in_article_id=401223∈_page_id=1770

Its actually quite usual for friends to fall out when one falls in love or starts a family. Rupert seems to imply something homophobic but i think its just the end of a friendship and a change of scene.

Despite what the Spice Girls say friends do not last forever and instead walk down different paths. If Rupert is a true friend however he'll be there if Madonna's path starts to get rocky.

Guy is just probably nervous around poofs due to some incidents he had while a public school boy. You'd think Rupert would be more aware and sensitive of that fact.

I suppose one could say too that if Madonna is a true friend she should maintain her relationships.

I have 2 close friends who are married that handle this issue quite well. Others have not so much. My 2 close friends and I don't talk as much, but we are still v. close.

Rupert is probably HIGH maintenance (my guess anyway) but I think Guy's supposed problems are Guy's alone. He is a filmmaker for Goddsake- the arts! Maybe Rupert is exagerrating that. Maybe Guy thought Rupert was a prick?!

As for that Starbuck's issue, I don't know what to say. They don't need to be on every street! One would guess there is one very nearby? As sure as there is sky, there is Starbucks.

I interviewed him at a weekend press junket in Miami for The Next Best Thing..He was super nice and chatty at all of the events leading up to the interview, then once the interview had happened, he wouldn't even say hello when passing in the halls!

Still, he's a good writer...and I've been enjoying those daily mail excerpts muchly. Wish the book was coming out here sooner. I especially liked the one about Sharon Stone! you?