Only so much you can learn in one place 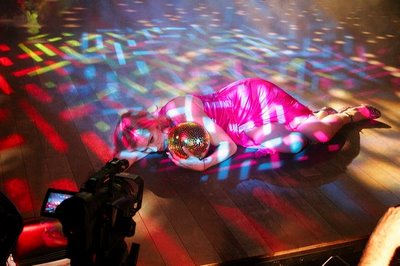 Madonna will release a new song in November - a 7-minute ditty monolithically called "History." She doesn't have a history (see what I did there Paul?) of releasing brilliant b-sides, so who knows how this will be? Geekfans are, of course, declaring the song a masterpiece before it has even been heard. The whole "Jump" shebang comes out on October 17 and here is the tracklist:

One wonders whether it is a cover of Michael Jacksons rather cute track of the same name or a philosophical treatise on the end of history.

I am quite impressed though that she's even bothering with a b-side. She most definitely insists on being a remixes artist, doesn't she?

People on a few of the Madge forums are declaring it shithouse already after hearing a 4 second clip of it (!!!!). Surely it could not be any worse than Future Lovers.

FutureLovers rocks. I hate Madonna. But that song. When it doubt always go to Moroder. Someone should mash up Future Lovers with Light Years.

Oh Pinkie, the new track is surely the latter of your choices, with lyrics by Frank Fukuyama, who - NAMEDROPPING ALERT! - I sat near in a meeting this morning. I said "ooh there's Frank!"

i love what you did there xo! I've missed you :)

Pinkie! XO! Fukuyama and Madonna! How on earth do you guys do it?

I wonder if "Jump" is maybe a little late for the single treatment after it was playing the background of "The Devil Wears Prada" commercials a couple of months ago. Maybe it will be strike those who didn't buy the album as familiar and not just because of the "West End Girls" vibe.

I don't even hear the PSB thing anymore! THANKS btw for the CSS song. I saw the video on PJ or something.