Maxwell: Plushed on some luxurious... 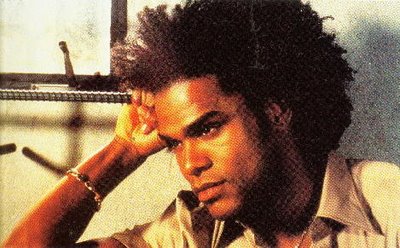 Maxwell is finally back. After 5 years in hibernation, he is returning to the public eye/loins with 3 new records spread out over the next 3 years. The project is called Black Summers' Night and it's detailed a bit on his myspace page. The first album is out in February and the new track "Fistfull of Tears" will debut on myspace in the next 2 weeks. Other titles are"Happiness" and "Bad Habits"

To celebrate, I give you a few of Maxwell's finest songs, some known and some rare...

Maxwell Lifetime
My favorite Maxwell song and probably in my top 20 of all time. It either makes me cry or gives me chills everytime I hear it, mainly on the "I can lean to the light" bridge at 2:40. Really moving. Watch out for the wet-looking chin in the video. Ahem! He's beautifully shot in this one.
Maxwell Ascension
The debut single: all Marvin-y and sleek. I like how it takes awhile before you see him in the video.
Maxwell Softly Softly
Techinally, this is Sweetback (Sade's band) with Maxwell singing. It is stunning. Love the intense vocal at 3:20ish.
Maxwell Fortunate
A soundtrack rarity that was a single with a decent video. He did this song with someone like R Kelly, so it's a bit more mainstream urban than his other tunes.
Maxwell Seguranca
Bossa nova track from 1996's Red Hot And Rio CD. Gorgeous.
Maxwell This Woman's Work
The fantastic Kate Bush cover. He recorded this twice, once unplugged and then in this studio version for his last album, Now. I bet Kate likes the video. I have one complaint with the studio version: I think he should have dropped the falsetto for the last minute of the song.

Even if you don't download any of these, please take 5 minutes and watch this Unplugged version of "This Woman's Work" (which may be better than the later studio track). I like watching how he moves his hands and I love the way he says "craft" at about 1:27. Can you imagine what this would have been like if you'd been there live? I was teary-eyed after watching this for the first time in many years.

I effing love Maxwell. Brings out deep emotions in me that i never thought i coudl have.

Did he, as the rumours suggest, come out on this album?

his version of my favourite kate bush song is a marvel to behold. I really like it alot... now i am embarrassed that i am posting about Lemar this afternoon :O

Self-promotional time: PopEatsPop has finally come into the world!

I don't see any posts there?

As fate would have it I've decided on a different song/subject. It will be up there later in the day. Promise!