Gwen, this love is serious 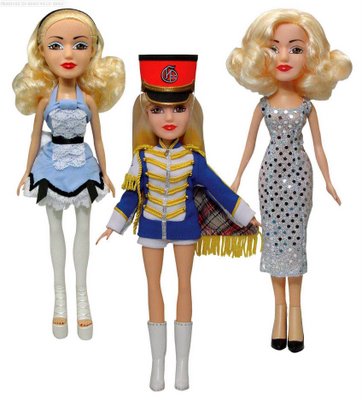 There has been a load of hate flying at Bitchin' Gwen Stefani this week from the Popjustice boards, particularly in relation to her announcement that her next CD will be comprised of leftovers from the L.A.M.B. sessions. I have to speak up!

Hatin' on Gwen is a bit of revisionist history. For some reason, pop culture has stuck on the ubiquitous, zeitgeisty single "Hollaback Girls" - a song I proclaimed shit early on. I have warmed to it, but I do hate what it did to radio / MTV: it removed melody from modern hiphop pop, paving the way for the Timbaland resurgence and the arrival of producers like Swizz Beatz. Ironically, it was the last gasp of Pharell Williams who has been on the skids ever since.

BUT BUT BUT. If you actually go back and put on Gwen's album, you'll find that it is an outstanding pop record. "What You Waiting For", "Rich Girl", "Cool", "Danger Zone" (my fave), "Serious" and the New Order-ish "Real Thing"... those tracks alone make L.A.M.B. a remarkable pop album. I remember when the first single came out - I was ecstatic over that song. Not to mention the Tick Tock remix which predates "Hung Up." I kept running around town singing "Look at your watch now! You're still a super hot female!"

That was the period of time when Bitchin' Gwen was the Queen of XO's Musicquarium (now Middle Eight). Constant posts about her, with beautiful pictures..she must have done a photo shoot every morning (a la Xtuna now). And then... one day... I broke up with Gwen. I'd just, like, had enough! The vaguely racist Harajuku girls she toted with her like bags, the fake chola girl stuff of "Luxurious", the b-a-n-a-n-a-s cheerleader crap. Not to mention weak TV performances with large teacups and crinoline little girl dresses. It all seemed sort of infantile.

But Gwendolyn is a truly great pop star and one of the few who shifts units (no pun intended) in an age when pop music seems more diminished each month. I am a bit worried her next CD will be hijacked by Hollaback clone tracks. Her single with Pharrell on his CD is barely a b-side. There is cause for hope though: an insider on the Velvet Rope posted about visiting Dallas Austin's studio while Gwen was in, pre-LAMB release. They played him a track that he thought sounded like a number one, but the song never made it to the CD.

Mrs. Rossdale, I still have your digits. Do you still have my jacket? To quote Mr. Sumner, we'll be together again.

I am also ambivalent about Gwen's pop persona. I don't want to sentimentalize what is probably merely a general nostalgia for the 90s, but Gwen's Stevie-Nicks impressions were--to me--way more genuine than her fetishist Tony Basil schtick. Don't get me wrong. I'm as much a fan of 80s revivalism as anyone, but when Gwen went solo she lost the support structure that tempered her gumsnapping blonde ambition. Case in point: No Doubt's last single, their cover of Talk Talk's "It's My Life," is more musically compelling than most of LAMB, which was at best a wildly uneven record with one great and thoughtful pop song (What You Waiting For) set amidst a sea grating and mind-numbingly shallow tracks (Harajuku Girls, Luxurious, Long Way to Go, Rich Girl, etc). LAMB wasn't a pop record, it was the soundtrack to an image--which would be fine if it were at all interesting or relevant. Listen to the best of No Doubt--Home Now, Simple Kind of Life, Underneath it All, Sunday Morning--and try to argue that Gwen wasn't better with her old boys.

Owch! We'll have to disagree about "It's My Life" - I find that appalling, though I applaud the effort. She could have chosen something obvious like a Marley track (or a Marley track! "Tomorrow People"?)

I think a number of the songs on LAMB *appear* to be as much about her like as "Simple Kind Of Life" (the public bitchslapped her for Saturn, remember). What You, Cool and probably Danger Zone all represent her life (the latter is wishful thinking re Gavin and his daughter Daisy Lowe)

I DO think that Gwen needs to chill out a bit and strip it down on LAMB 2. I doubt she will. I think she has been emboldened to court hiphop.

Whatevah - just give me the Tick Tock Gwen doll.

I think if Gwen has more songs along the lines of "Cool" and "The Real Thing" on her next album it will be great.

If Gwen ever decided to do an album in vein of Spiderwebs I'll love her forever. Failing that I'd like to see her go in a Bubble Gum Electric route.

I think what she tried to achieve on LAMB was done by Robyn on her most recent outing. Except Robyn didnt have the desperate-eager-to-please facet that made LAMB an album of supreme superficiality.

I dont care whether she strips down or not. I think Gwen should just dump the tracks that appear to chase trends and fashion chords. The moment she does this she'll have an album that is deemed 'pinacle' and 'cutting-edge'. Her end of year report for LAMB was 'bitch ya tryin to hard girl'. She lives two seconds away from Neneh Cherry(they're both Primrose Village beauties). I'd love it if she hooked up with the Swedish beauty and see what came out of that. Less of the tricks, keep it fresh, go it alone and Gwen will have an album like that of Robyn's excellent fourth LP.

As Victoria Beckham once exclusively opined "its dat simple".

I must be really tired as I didn't track the connection between Mr. Summer and Sting. That's it, my 80s cred is shot to hell. I only saw him in concert for that tour. My thoughts on Gwen are even more ambivalent/negative than yours. I do blame the Hollaback girls. Am pissed at her, Red Hot Chillipeppers and Goo Goo Dolls for not necessarily the same (or rational) reasons.

I love LAMB...sorry...actually ended up at the TOP of my 2004 list (very late entry). Real Thing was fantastic, Danger Zone, Crash, WYWF, Cool, Serious, Hollaback, Bubble Pop--all great songs in their own way. Even the somewhat tacky Rich Girl grew on me with it's Fiddler on the Roof reference. Maybe a little disingenuous--like Madonna complaining about having fame in "Hollywood" or stuff in "American Life", but still catchy. Not really sure if Harajuku Girls is actually racist as some people feel--I think she was really trying to send up their style and how she admires them, while taking the role of a kinda clueless westerner. I cannot WAIT for LAMB 2! Bring it ON!

By the way, her show was great--she did the whole CD plus a couple great new songs--the aforementioned "Orange County Girl" and the kooky "Wind it Up" (Hollaback Girl meets March of the Toys)--hope they're both on the new disc! So much energy & 3 months pregnant at the time! YOU GO GIRL!

Countpopula, you just totally psyched me out for this new album! I say bring it on, too (but not Bring It On 2)...

I've never remotely considered "Harajuku Girls" to be racist. I think she's totally giving props. An homage, if you will...

But seriously, wasn't anyone just a tad disappointed when they first played her solo album and found out "Rich Girl" wasn't a Hall & Oates cover?