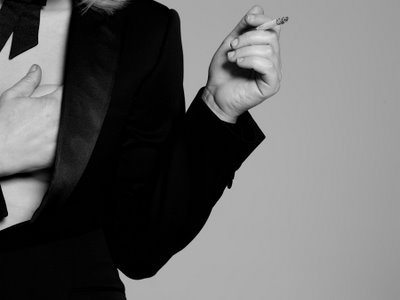 The new Bluetones single "My Neighbour's House" is fantastic. Hear it (and feel happy!) at their myspace...Tim Finn has a new album called Imaginary Kingdom coming. Hear his new single, which sucks dirty ass, at his myspace...Richard Hawley continues to work his fantastic Coles Corner album with a more string-laden version of "Hotel Room"...The Kooks "Ooh La" is their next single. I lurve them completely...Nerina Pallott (who is bored with the Internet!) has covered Kylie Minogue's "Confide In Me" for her new single! Help Paul!...I enjoyed this Australian TV interview with Lily Allen. Still love her...Mick Hucknall, less fat and less drunk, talks. Not that we care...Scatter O' Light did a nice post on INXS this week which includes the rare Max Q tracks. I always liked "Way Of The World"...The picture above is Courtney Love from Hedi Slimane's fotoblog...

colour me excited re bluetones and nerina :) I may be able to help fairly soon :) although i am a bit miffed as i told her to cover Otto Titsling for her next single... oh well can't win them all!

I can't believe the Kooks are still releasing singles off that album! I think the record comes out in the US soon with Eddie's Gun as the first single. it's weird because when I was over in England that's all I heard were the Kooks.

NME is actually starting a club night out here in LA, and The Kooks (or is it just Kooks??) are playing it at the end of the month.

Hope you had a nice Labor Day :)

NME night in LA. I would be a regular!

Did you sit on a cactus on your days off?!

i thought that bluetones song was really good on first listen, but it turns out there's not much there on repeated listens. still can't wait to see 'em in LA though!