XO in love: I want you to be the champion. 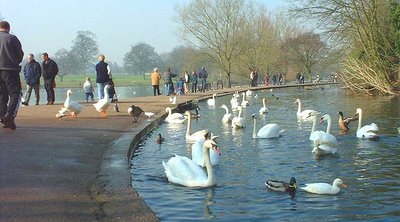 St. Albans, above, is just north of London. It's a pretty little town where my cousin (British Bridget!) used to live. The first few times I went to the UK, I used St. Alban's as my base. The picture above is just below the cathedral there. I am posting a few tracks from the heighth of Britpop ('95/'96), some well-known and some more osbcure...

Pulp Mis-shapes video
Classic! Expect a huge post soon about the album this is pulled from, Different Class. We need more heroes like Jarvis in the 21st century.

McAlmont and Butler You Do video
What train station was the video done in? Mc&B did a couple of perfect songs about relationships. Listen to how gorge it is at 2:30ish... and I love the first line: "I want you to be the strong one."

Supergrass Alright video
Can you think of a happier song? It should be noted that this band has produced a farrr more consistent catalog than the Gallagher Bros.

Reef Place Your Hands video
Place your hands on my hole. Run your fingers through my soul. Ummm hmmm.

Suggs Camden Town video
I think this was his first solo outing, post-Madness. Cute video. Camden is stinky, but fun.

Strangelove Beautiful Alone
No video for this lovely song that perhaps only Torr will recognize (or maybe not!)

Cast Walkaway
This album was just out when I first went to England. It had a great cover and this was the pretty ballad. I am surprised John Power did not stay in the limelight.

Bluetones Slight Return video
Wistful song - I think Paul posted this recently. I'm not sure they ever matched this moment though.

Manic Street Preachers A Design For Life video
Monolithic. I am not overstating it to say this song belongs in the top 20 songs to come out of England. Ever. Libraries gave us power. Librarians too!

Dodgy Good Enough
There should be a video for this but I couldn't find it. Dodgy are trashed by critics now, but I like this song! Lead singer ended up working in Tesco at some point. Such is a pop life.

The image below is Bridget and I in St. Albans in May 1996. Yes, that is ME, xolondon, and no, it's not current, but that's what you get! In fact, a co-worker saw that pic today and said, "That's you?!" incredulously. What can I say, 10 years of drugs, streetcorner hooking, chainsmoking and... answering reference questions... has taken it's toll. 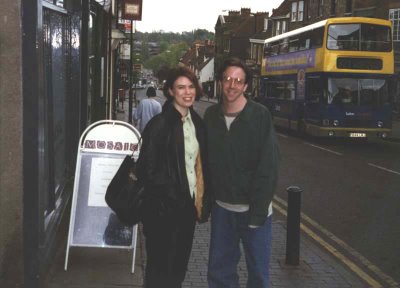 I am mixed on JDB actually. I sometimes find his singing sort of strained. I have not properly listened to his solo stuff, but I have one song, so I'll play it.

I need to post a very special Bluetones cover soon. You may know which one I mean. Them covering a famous diva song...

Cute picture! Don't really see THAT much of a difference from when I saw you. Except your hair is curlier.

I want to see new places but I keep wanting to return to London.

Now I hope I haven't packed up my one Pulp CD...

I heart "Misshapes" by Pulp. There's a great book -- which I just read this year -- on that whole era called Britpop!: Cool Britannia And The Spectacular Demise Of English Rock, by John Harris. It's very informative, and a great read! You can get it on Amazon... I found mine at Tower Records (who, incidentally, filed for bankruptcy again this week).

everyone is right to heart London. but don't forget england is so much more than London. it is Birmingham as well. and sometimes manchester. but not very often...

ps did you say fucktard???!

I love that you refer to Jarvis as a hero. It pains me to think that there are many who don't see him in the same light.

Ask and ye shall receive I'm-always-Right

As I remember your look more from college, your hair is shorter than I remember, but then so is mine from what it was in college.

It's a very cute picture.

great post! And no, even i didn't know that Strangelove song :-)

xo, that track is brilliant. I wasn't even aware it existed... hopefully a HI-Q version of it shall surface at some point...