Catching up with George: A night in the gay garden 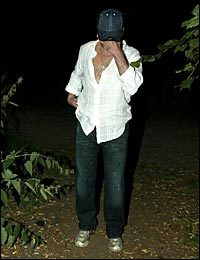 An easier affair indeed. According to the oh-so-reputable News Of The World George Michael has been up to his old tricks (literally if you read the report) in Hampstead Heath! Cruising at night!

News of the World investigators caught the singer red-handed and red-faced as he emerged from the bushes (above) after cavorting with a pot-bellied, 58-year-old, jobless van driver (below).

But wait! There is so much more! Here are more choice excerpts… 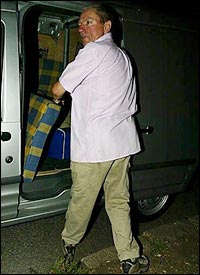 …he ignored all the risks and dangers to pull seedy Norman Kirtland. The pair kissed and groped each other before going even further.

…his new buddy Kirtland crept from the undergrowth looking sheepish and rushed to his Ford Transit van. As he opened the door a grubby, stained mattress was clearly visible in the back.

…Looking gross and dishevelled, Kirtland answered the door naked — pulling on grimy shorts as he invited us in…Kirtland's dingy place just off Brighton seafront, was littered with rubbish, dirty crockery and filthy laundry. His only companion is a 20-year-old cat.

…”He looked kind of brown so I said to him, ‘You're not totally English, are you?'

…"He did it very well. That was one of his major points. Then it was fondling and mutual pleasuring. It wasn't full sex but it was fantastic."

…When confronted by our team, a shaken George desperately tried to justify his sordid secret quest for cheap, risky thrills…In a sweat, the ashen-faced singer declared: "Are you gay? No? Then f*** off! This is my culture!"

I actually feel sorry for George. He is clearly 1) not the happiest bean in the pod and 2) just not cut out for fame anymore. This whole story is likely bullshit, but people will want to believe it because it's so kooky. And losers like me will repeat it! Poor Whore-hay.
Posted by xolondon

I am so embarrassed by George Michaels!

It's not "our culture" at all, you silly clapped-out 80s popstar.

I'm embarrassed, too, by the "our culture" comment (and said so much in a post earlier this morning), if it is at all true... He needs a serious intervention.

i love that george is a gutter slut. i'd love to run into him behind a bush! ha!

I just wanna clarify one thing -- for some reason I feel the need to -- which is that I personally have nothing against anyone's lifestyle / cruising / gettin' their jollies in a park, etc. etc.

However, #1 -- the comment about "this is my culture" is lame. Whether it's News Of The World totally making it up, or whether George himself actually said it... it's lame. #2 -- GM is a public figure... a celebrity, for Christ's sake... the days of doing this kind of stuff / passing out high on whatever in a park / wandering around out of his gourd ended when he chose to live a public life. I mean, certainly, those days for him haven't ende, apparently, but as he continues to get caught doing this stuff, he's gotta expect the fallout and commentary.

I mean, hell, I've certainly paid money for George's CDs, and so, as a consumer, there is a natural level of expectation for him to not make the same mistakes over and over. Once or twice is forgivaeable, but after awhile it just comes off as sad. That's just the way it goes.

I just didn't want anyone thinking I was putting down any aspect of gay culture or lifestyle. At the end of the day, I just wish would stop the bullshit and record a good album. He has been, after all, a great songwriter in the past.

Well, actually, yeah, it is an aspect of gay culture. It's just not a healthy, well adjusted one.

Sometimes people choose public careers because they are insecure, and need people to pay attantion to them, to love them. Evidently George is still having trouble with this aspect of life.

It's OK Georgie, I understand. Keep trying to find love. Maybe Elton John knows someone and can set you up with them.

I would actually argue that maybe his behavior is sort of escapist. The way some people drink to ease their worried mind, Whore-hay is doing that as well. OR maybe he actually does not do this very often, and then we're armchair analyzing for nothing.

and as far as saying it's not a "healthy, well-adjusted" part of our culture...what's with all the judgments? just let others live as they choose! if you dont' want to "cruise" or whatever, then don't, but don't come down on those who do.
the stones can be thrown in the other direction, too!

what we as a queer community need to do is become united as we are clearly at war. picking each other apart is a divide and conquer mindset.

It's human nature to wanna know that celebs are dirtyminded or f'd in some way. GM is both hounded by press and invites the drama. At the end of the day I just wish he'd make more records.

Ultimately CB is right and I maintain that everyone who reads this blog has some sort of sexual issue/event that they would not want blasted onto the news. Right? Yes!