You must learn about Nick Heyward! 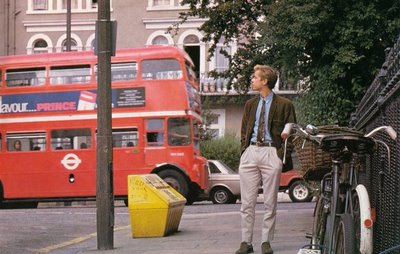 Nick Heyward made his name with but two international hit singles in the early 80's (yes D'luv!): Love Plus One and Favourite Shirt (Boy Meets Girl) - both by his group Haircut 100. Nick was/is from the school of perfect British pop music. Jaunty melodies, witty lyrics, strings. His looks were part of the appeal, as if he'd tumbled straight out an English public school, a blond choirboy, with a love for the Beatles and a desire to be corrupted by an English rose.

Nick was born in 1961 on Kent, England. Haircut 100 was formed in 1980 but only lasted a few albums, though you'd never know that, given the numerous Greatest Hits CDs. This band was a part of the booming 80's pop scene in London - why oh why wasn't I there? Nick carried on a worthy, if not terribly lucrative, solo career from about 1983 until around 1997. Here then are five essential solo tracks, up for 7 days/10 downloads, all are brilliant: note - all MP3s were up for a short time and are now expired. Sorry!

Whistle Down The Wind 1983
The first Nick solo single, this was far more ambitious than anything he ever did with Haircut. Loved this when it came out (ooh that dates me!) - I actually had a 12' single, which had a nice orchestral instrumental. I like how he doesn't sing the title of the song until the final vamp, which leads to a gorgeous last 5 seconds with the orchestra. One serious oddity: I've always thought the bass sounded kind of... farty. Am I right? It farts throughout the verses and 2:14 sounds like he really moans one out! I hope that doesn't ruin it for anyone. "Bring me back my rose I gave away... in a picture, a freckle and famous feature." buy North Of A Miracle

The World
My favorite Nick Heyward song, purchased on CD in 1995, on my first trip to England. It's from an album called Tangled that is worth far more than the couple of pounds it costs on AmazonUK Marketplace. There's something sort of minor-chordish and subversive about this song...the bass lends it an undercurrent of worry. "Close your eyes and think of England." buy the single

Kite 1992
Covered by other artists including Ivy, this song is the definition of Beatles-inspired pop music. A lost classic, it's 3 minutes of pure bliss, put together like an intricate puzzle. buy From Monday To Sunday

London 1995
Chamberpop from Tangled; the wordplay on this is brilliant. Can you spot the song references thoughout? "At midnight, let's all meet / There's A Bomb in Wardour Street..." Love the notes matched by the bells at the end (down-down-down). This was actually the song I first listened to when I wanted to name this blog. I had all sorts of possibilities: London's Gone To Sleep, London's Mine, etc. Nick Heyward and Supergrass tunes were my potential name sources, none of which I ended up using. buy Tangled

Traffic On Fleet Street 1988
I like any song that namechecks the streets of London. This is actually a bedtime song for me, it's so airy and smooth. buy I Love You Avenue

Do you ever wonder which of today's artists will be doing reunion tours in 2020? Who will be kicking around doing music after all that time and who will be retired to the English countryside, where they will grow plump and have rose-cheeked children? Or will they do both?
Posted by xolondon

Me me me! I almost wore out my vinyl copy of _I Love You Avenue_.

And of course I know him/them! We got MTV at our house in summer 1982, when I was a wee lad of 8! Most American artists weren't making music videos at that point, so a lot of Euro/UK stuff got aired - hence the whole early '80s 'new wave' scene crossing over here. Anyway, I vividly remember "Love Plus One" and that "Boy Meets Girl" one.

"Love Plus One" always got me with the video because at that point I was a huge horror movie fan (still am!) and I liked that the one guy was playing drums using bones and skulls.

I've been a fan since the Haircut 100 days and have all the solo records (and met him in Toronto once after a concert).

I haven't seen much about him since the VH-1 'Bands Reunited' show on Haircut 100, still holding out for another solo release.

of course i know who nick heyward is - he revolutionised levis after doing that commercial in the mid 80s then recorded a song written by madonna. Mint!

Just kidding, bitch please, nick heyward (along with aha) was the only music me and my no good beatnik brother agreed on. You've made me nostalgiac for the days when he wasn't such a waster. My bro not Nick Heyward....

I was always sort of nuts for "Fantastic Day" myself...

Your post got me looking at my Heyward cds and I've posted an MP3 of Nick's cover of 'If I Needed Someone' by The Beatles on my blog, check it out.

I always quite liked "How do you Live Without Sunshine" from the From Monday to Sunday album. And "Favourite Shirts" is a too often lost Haircut 100 classic--just as good as "Love Plus One".

I used to tape the syndicated "Rock Over London" radio show and I had "Kite" on a tape for years but didn't remember who did it. Thanks for reminding me, it's a great song.

Okay Daft Monk, I'm thrilled you mentioned that show! With Graham Deane? LOVED it - do you still have tapes. You should burn them onto CD and then turn em into MP3's. I would kill for those. That show was where I first heard "Running Up That Hill" among a zillion other things. I vividly remember him play "Sussudio" but I try to forget that!

They would have rock news with some woman whose name I forget. Selena or something like that.