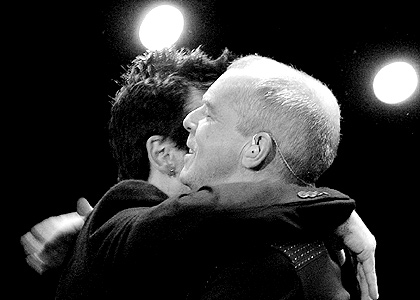 Friday I received my amazing Pet Shop Boys' Fundamental package in the mail, just in time for the holiday weekend. I grabbed Fundamentalism (the hot orange one) and took it with me in the car when I drove out to my father's birthday party. I was cruising along in a fucking intense rainstorm with all those chilled out remixes of the new tracks turned up very loud in my car. Lovely.

Fundamental is probably the best album of 2006. It's going to be hard to top, though I hope someone tries. I've started noticing how the album works as a whole unit, with political themes that don't bang you over the head, but are pretty clear. Cool as a cucumber, Neil Tennant.

Twentieth Century, for instance, is the sleeper gem on the album, with it's "sometimes the solution is worse than problem" refrain. I can't help but think of Iraq, but it could easily be about two lovers. Casanova In Hell has another witty lyric about how Casanova's erection is his legacy [if I don't have a proper life, I'll make mine my legacy too]. The music mixes OTT lyrics with Human League-ish ooooh ooooh oohs and strings that rise and fall like a... cock! In contrast, the incredibly sad Numb has moments of pure beauty, especially in the opening (:27 secs) and in the middle eight (2:47), when he sings “take away all madness.” The final 50 seconds are a melancholy comedown that gives me goosebumps.

Trevor Horn's production is immaculate (see what I did there?!). My only complaints: Luna Park sounds like a leftover from Release and doesn't go anywhere. When I loaded I Made My Excuses and Left to iTunes, I cut off the intro and it's much better. You can clip the first 1:48 of it and you're left with an affecting 3 minute ballad.

You've seen my comments on Minimal, Integral and The Sodom And Gomorrah Show. Expect Fugitive too, which I believe would have been an ideal album opener, rather than being relegated to the bonus disc. Be sure to read Tremble Clef's prospectus-like review of the album, spread out over several May days, and also Euphoric for all the news and links. I love that site and its nice webmaster (shout out).

In the meantime, the Brits had the luxury of a Pet Shop Boys concert on TV this weekend, soon to be released as an album. If you think that sounds dull, listen to how amazing they sound live. This is one of my Top Ten PSB songs - the lyrics are terrific...

"You're a devil, now an angel / Suddenly subtle, suddenly silent as a monk / You only tell me you love me when you're drunk"

i just read my review (albeit a very brief one) of The Feeling album - a disc which in a few short days i love, and then i read your review of Fundamental and i hang my head in shame :( You have a great way with words and it clearly comes through how excited you are about the tracks and their impact on you. So much so that you made me go and put it on for the first time since Friday... well done that man

"Oh this old thing?" I just slapped it together! ;)

He he, I also cut off the IMMEAL intro. It sounds so much better without it. The arrangement of the song is very "So Sorry, I Said", my most fave Liza track.

And cheers for your interpretations. I'm still having a bit of trouble figuring out what it all means. (Not a native speaker.)

I hereby demand that everyone restore the introduction to "I Made My Excuses..." The song is all about having an absent chorus: you hear it at the beginning as an intro, you get the verses, then the chorus melody returns but is again unsung, and the middle eight comes in. It's a very interesting way to structure a song, and the intro is integral. Integral, I tell you!

You can download a number of the live delights chez moi.

Agreed with Mobius that "Excuses" sounds so much like "So Sorry I Said."

I think I read that the line in "Twentieth Century" about watching the statue fall was about when the Saddam Hussein statue was pulled down.

It's such a good tune that's kind of buried at the end of the album... It's the "I Want To Wake Up" and "Young Offender" of Fundamental.

Excuses - I won't play it if I put the intro back on, trust me. I hate that bit. I already cut off "Luna Park" which some peeps think should be a single, so the damage is done. :)

Agreed about the statue - that has to be right, though the chorus is more open to interpretation. I DO think it IS intentionally about Iraq though.

Thanks you Homo for the live tracks. Awesome!

the lyrcs to ...DRUNK are actually:

"suddenly subtle, solemn and silent as a monk..."