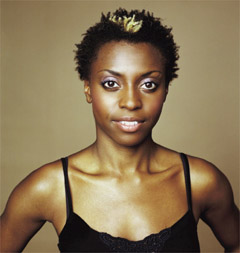 I spent my off-moments today on PopJustice arguing with fuckers about the merits of Skye Edwards' first solo record, Mind How You Go. Perhaps you have noticed my c*nty tone the last few days? I pulled a muscle last week and it has me bitched out. I'm in a mood where if my hair is in my face, which it always is, I will go off! Peaches'n'cream, yes? This album is either an antidote to that state of mind or a reflection of it. It begs for a hammock, a shady tree and a glass of Sangria.

Honestly, I do not want everyone to share my opinion - well, I do! - it's that I don't have any tolerance for fools who start thread with, "This record is pure shit. It will fail." I don't trust these kind of posts because: 1) there's almost never any substantive explanation to back up their point and 2) these people always speak as if what they say is Fact. Skye will tank as the sky will be blue. Whatever.

In the message board world, some people post as a way to provoke others and get into arguments, because they're into that; they are into public display. PopJustice is a pure pop board: it tends not to stray too far from the Madonna / Girls Aloud ilk. Skye is more of the Zero 7 style woman - she creates music that some would call Starbucks music. I doubt many kids on that board even know who Gary Wilson (correction Gary Clark, ex-Danny Wilson) or Daniel Lanois are - both men collaborated with Skye on the album.

Tremble Clef turned me onto Skye's beautiful prose-y track about New Orleans called Tell Me All About Your Day and I have been hooked ever since. The voice of Morcheeba for many years, she's put together an album of songs that are not much like Morcheeba's BNH/Portishead hybrids. Produced by man-behind-Madonna's-curtain Patrick Leonard, these tracks are in the same family of music by Frou Frou, Morcheeba, Zero 7, Sia, Mozez, Lamya and Sade.

The problem is that Mind How You Go exists in that space of music that is really hard to describe without it sounding bland. Read Tremble's piece on the most personal track, the aforementioned Tell Me All About Your Day - it's a testament to how well he writes, because I am at a real loss for what to say about mid-tempo beauties like Stop Complaining and Solitary.

Skye's themes are not extraordinary: relationships - the same emotions I am feeling right now. "I don't know when was the last time that I slept the whole night through / another morning comes around and I'm so tired." The fact is my mood is not really all about a sore shoulder. It's something more than that - it's unexplainable and that's what makes me want to tear my hair out.

So many people go through big events in their lives and I haven't for a while, or maybe I just haven't defined them that way. It doesn't mean I'm not living my life or hiding from it. Sometimes I get, as Skye sings, "twisted up" by other people's pain and I just want to run away from everyone/ everything. As I've aged, I have been known to turn that off like a switch: enough. I can't react anymore and my lack of reaction is as hurtful to them as any lashing out I could ever do.

This review is not about me, but I hope it explains in some small way what I like about Skye's record. Subtlety, empathy, a reality that is not always filled with passion. I urge you to check out the track below; I love the way it subtly builds from disillusionment to acceptance to a glimmer of positivity. All the while, that ticky little drum-n-bass thing clacking in the background. I don't expect or need you to love it, but I do care.
Posted by xolondon

Thanks for the tip on Skye Edwards, the track is great and I'll search for the whole album.

I'm guessing you meant to say Gary Clark (not Gary Wilson) worked with her on the record (another good reason to check it out as the man is a genius.)

I'm glad I introduced her new stuff to you.

You're absolutely right that it's become very difficult to describe music that people think of as "coffee tablish" or Didoesque -- it's lazy thinking, and certainly no one (or most people, at least) would dismiss all rock or all pop or all jazz. But I think you do a bang-up job surmounting the difficulty: Skye's album is like the person you come home to talk to at the end of a hard day spent fighting with people on message boards :). And honestly, that's about as good a description as I've heard.

i haven't listened to her music yet or downloaded the track because i am at work, but what you wrote really resonated with me and sometimes its difficult to get people to see the value of music beyond say the throwaway pop of Britney or the throwup pop of mrs Robinson. I think you put your case forward very eloquently and you have quite the engrossing prose. I too have albums that i will put on that are kinda like an aural soothing hug at the end of a tough day.... now i'm off to bitchslap some people on the boards ;) (doesn't that negate everything i've just said...?)

I've liked the two tracks I heard a while ago and I loved her Morcheeba stuff. I agree with you in that it's hard to describe without it sounding like stuff they advertise as available at supermarkets. I like it. That is good enough for me.