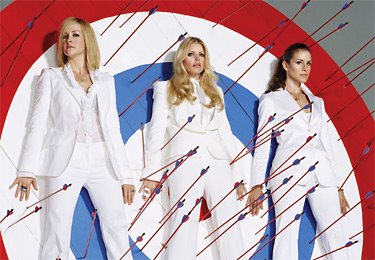 Stream the new Dixie Chicks album, touted as smooth California rock, though it doesn't seem all that different to me?! Fuck George Bush... love Natalie Maines!

i only really became aware of the chicks better known as dixie when they were on the cover of the second best magazine in the world (entertainment weekly) in their nude with nasty words written all over them. I don't usually do country but hey i love to fight the power so i am so there.... aren't they ashamed to be george bush or something?? Who wouldn't be?

Yeah, they announced during a show that they were ashamed to be from the same state as George Bush. That instantly propelled them to me loving them, but a lot of other people getting up in arms in our now ultra-conservative times we live in.

The new album is super! It's a shame Clear Channel (the huge radio conglomerate over here), also ultra-conservative (and under payola investigation...yay!) didn't give the single any radio play.

I have all three of the d.c's albums. Had some country leanings in my mid twenty's (due to a friend of similar interest, who's queer, which is just special). Many of them I've deepsixed in my 30s. Still like the d.cs and Mary Chapin Carpenter and Patsy Cline (though she's classic). Their last album was tres good.

By the by, the nude EW magazine was on my desk at school for two weeks and raised a few eyebrows.

I think I remember that the country station didn't play their latest. Or much. Fascists. That Toby Keith dude is coming here soon and I'm not going. I did like the duet he did with Willie Nelson, but that's enough.