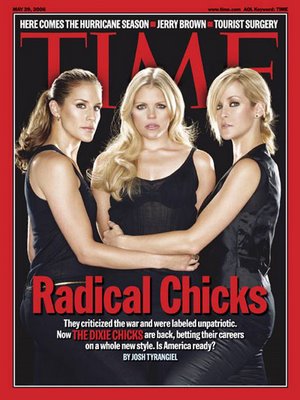 I am obsessed with the lead track, The Long Way Home, from the new Dixie Chicks album. What idiot chose Not Ready To Make Nice (good song, but it alienates people) and Everybody Knows over this one for a single? It is very much a personal, yet accesible, manifesto... and one that I relate to:

The thing that's honest about this lyric is that in the second verse Natalie says she couldn't do what the people she met along the way told her to do either. She couldn't trade one set of rules for another. The middle eight is excellent:

Well, I fought with a stranger and I met myself
I opened my mouth and I heard myself
It can get pretty lonely when you show yourself
Guess I could have made it easier on myself

I have a sense that if you are the type to have a blog, then it's not just that you have something to say - most people do! - it's that you want someone to listen to what you are saying. I have always been this way - always had my nose in everything: "What's going on? Oh? Do you want to know what I think?! ...no? Well, this is what I think!" heh heh. I tend to err on the side of talk rather than silence. Often, silence or reserve does the talking better, but usually I open my mouth and then regret the minutiae later. As I have aged, I've literally found myself internally chanting, "Do not speak now, do not start, do not speak now..." in certain situations.

I hope the record company has the good sense to release The Long Way Home as a single - it is upbeat, proud and has amazing harmonies. You can hear it now as the first song on the AOL stream of the CD. The first several songs are excellent. Remember that streaming audio always makes songs sound tinny and lacking in body.

UPDATE: Jefitoblog posts the song I mention above!
Posted by xolondon

I have girl-crushes on all 3 of them, Emily most of all (did you read that bit about her almost going to the USAFA?!). They're playing Verizon on August 4th, TV...wanna go? I can loan you their catalog to date to catch you up. ;)

there was a big feature on them on the front of Music Week out today which states they are releasing the album here on June 12th and i may well have to break my no country rule and purchase, if only just to stick it to George Bush Jr. He will be well sad when he reads this ;)

I'm sitting here looking at the CD now... I bought it for the ball and chain yesterday at Tower for only $9.99.

Meanwhile, despite the lack of radio play, the album is currently #1 on both iTunes and Amazon, after only one day of release.

ADD, we'll talk, it depends on cost! I am shooting my wad on Madonna. Errr, so to speak. :)

Paul, I don't know if Dubya reads my blog after I slammed Janet Jackson.

Jason, doncha mean balls and chain. Heh heh. I do enjoy my own sterling wit.

They rock my world. Be sure to loan xolondon the last one and Fly. Though I like all of them. Maybe I should plunk down the money for them.

I love the lyric in Goodbye Earl that says both of them were members of the FFA.

I clearly have the foot in mouth disease. I've had it ever since I've known you. When I have clarity, I do the " Bite your tongue. Bite it now" before I say anything I'll later regret. When I don't, well bad things happen.

I-tunes is playing Tori's "China" which is such a college song.