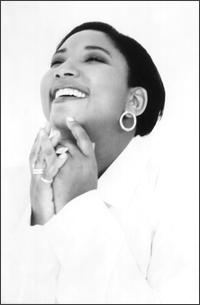 Reading reviews of the new Adele CD, there is frequently mention of Massive Attack and the great vocalist Shara Nelson. She's been long absent from her post in the 1990's as the elegant queen of new ambient Brit soul, but her music still sounds great 15 - wow! - years later.

Shara was discovered in 1991 by Massive Attack, who gave her the lead on their trip-hoppy mood piece Unfinished Sympathy [ed: it literally took my dumb ass 2 years to realize that song was not called Unfinished Symphony!]. Watch the video - it's one of the finest songs of the nineties.

She followed up with a near perfect solo debut in 1993 called What Silence Knows - this is the kind of album you can find on Amazon Marketplace for a song, which is a travesty because it's brilliant. Nobody is an excellent song for the iPod age - music for stomping over pissants! Down That Road evokes pride, personal freedom, etc etc in a catchy, thoroughly contemporary pop soul song. Her collaborators reveal her willingness to take chances: PM Dawn, Paul Oakenfeld, Tim Simenon, Bomb TheBass, Saint Etienne, Mike Peden and David Arnold, among others.

Shara's second album, 1995's Friendly Fire, was edgier, but not quite up to snuff and really only had one track I truly liked, After You. She reappeared on David Arnold's 1999 James Bond tribute CD with a sparkling, pure cover of Moonraker.
Since the 90's there has been very little heard from Shara. It appears she has recorded a new track called Go That Deep with a group called NUfrequency (watch a teaser). Her website is a bit out of date, but does offer up a free MP3 called If. Meanwhile, her contemporaries Portishead are about to launch their first album in years, so a new one from Shara would be welcome by many...
Posted by xolondon

Email ThisBlogThis!Share to TwitterShare to FacebookShare to Pinterest
Labels: 90's

Hurrah! I still play her albums... when I remember.

She wasn't discovered by them in 1991 though, as she appeared on the Wild Bunch record b-side The Look Of Love which was released on vinyl in 1988, which I do so happen to own! Have you ever heard the demo version of One Goodbye In Ten? It's the version actually produced by Saint Etienne, as she did the weird route of working with all these talented types then getting it produced-proper by Mike Pedden (if I remember his name correctly). It was a b-side. Ah, happy days!

For some other Shara hotness, you can't pass up 'Black Island' by Cuba feat. Shara Nelson. The remix by Groove Armada (Groove Armada's Desert Island Disc) is stunning! An mp3 should be easy to find on a p2p. Or I could upload it for ya sometime.

Nice to see a posting on Shara. I have her Massive Attack work and both solo albums. I agree with you that her first album was much better than the follow-up. I did tend to notice that her songwriting had a definite pattern to it, where she would take the first two lines in the bridge (pre-chorus) and repeat them, almost in every song!

I love Mike Peden's work. He used to be the drummer in The Chimes. I love how full his productions are. I actually seek-out albums where he does production work.

I ran into Shara here in New York at a record store. After the autograph and my gushing about her work, one of the things we talked about was how great Mike Peden is.

Her voice has that Aretha quality about it. "Down That Road" was my favorite.

Ooo I loved the Chimes! "Heaven" was a great song, as was their U2 cover, up there with Pet Shop Boys U2 cover. Whatever happened to Pauline Henry? Another post topic?

I thought Pauline Henry brought out an album (blink or you'll miss it) in the early 2000s???

I think a lot of peeps were disappointed with Shara going the Mike Peden route production-wise as the 'it' producers of the time were the likes of Nellee Hooper, etc.

Pauline Henry had a couple of albums, I think. the second one was covers, in my memoey anyway, bur I am getting old and confused!

I walked into the Hollywood & Highland Virgin Megastore last April, killing time before seeing that Luke Wilson/Kate Beckinsale thriller Vacancy, and "Unfinished Symphony" started playing over the soundsystem. It sounded so heavenly, and it was kind of surreal walking around while it was playing...

XO, you are so not alone with the confusion over "Unfinished Sympathy" name thing. Until reading this post I had no doubt about the title and now I'm going to go dig my Massive Attack discs out and triple check. I'm stunned because I feel like I know that amazing song so well.