Let me play you (a song) 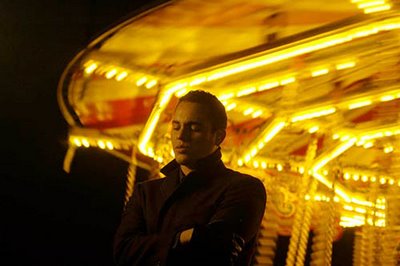 I don't mind, if you don't mind
I'll do whatever you have in mind
You and me we invent this game
and you don't even wanna know my name

I don't mind if you're hungry for a bit of strange
That's alright if you're lookin' for a little change
Can I be bold, and turn you around instead
I wanna see the back of your head
I don't even wanna know your name
Posted by xolondon

Kia Ora (Hello) from a blogger down under in New Zealand. Great music blog. I just started one and are looking for members too join. Their blog name will appear under my profile & vice versa.

i caught onto Kubb late (earlier this year) when Wicked Soul made me feel all naughty inside. I read an interview in Attitude magazine that said although he has a girlfriend, he's not averse to a bit of man loving either... Score...

ha! Slut! I was about to say you are up early, but I suppose it's really like 3pm in England. Le sigh. I could be there... my passport has lapsed and I need to fix that ASAP. I just don't want to pose for a new picture!

oh don't be shy - you can do so much with photo shop nowadays and i will invite you to my big fat gay wedding in june as a special bloggetha treat....

are you really having a big gay wedding in June?! The Anglicans would probably hook you up in St. Pauls, they are so liberal (or half of them are anyway).

yes one big gay wedding to darren coming up in june :) no st pauls wedding - we are having the reception at sleazy but fabulous Glamourous showbar in birmingham... i can't wait for my mormon relatives to drink that in!!

Sadface, the YSI link seems to be dead. Interesting that on a mainstream level, Kubb was promoted in a seemingly slow dull ballad way but in more speciailist press seems to be a rampant bi-horndog.