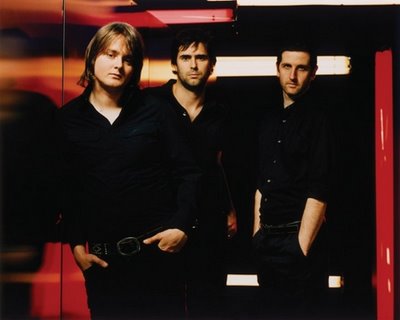 I generally love their music, but God are they dull to look at. The new video for "Atlantic" is out in the UK, but the only way Americans can see it is via a stream here. It appears to be about a fat lady in a bathing suit drowning in the sea. The song itself is more Keane-like than the U2-lite single, but my initial response is tepid.

Doesn't matter anyway, since you can't buy the audio for "Atlantic" anywhere. You can only buy the video! Once again I am baffled by Keane's various labels inability to get this out video out on iTunes worldwide and in acceptible formats. I mean, it's available in fucking Poland, but not in their biggest market? Goldfrapp it much?

For Keane-freaks, here is a webpage with their new logos and banners.

Wow, just going off this song, it sounds like they've done the obligatory second-album-recorded-on-a-coke-bender record.

This isn't remotely close to being a cool epic dirge as "Bedshapes" was off the last album.

The first single is certainly catchy, but I don't think it really speaks of what makes Keane KEANE. This one, which I assume is an extended video version, may grow on me, but it's a bit dirge-y. AND it's the first song on the album? Yuck!

People who have heard the whole CD seem to think it is good, but are not jumping up and down the way we did when we heard Coldplay's Rush album.