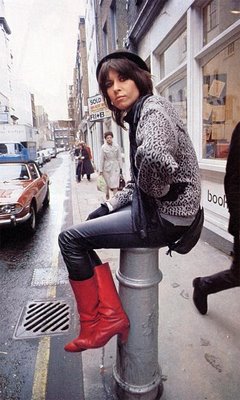 Yesterday Pretenders released Pirate Radio, a 5 disc box set (4 CDs and 1 DVD). There's been almost no news about this, perhaps because they are not as well-known now they used to be, which is sad sad sad. Chrissie Hynde's voice remains near-perfect after 25 years in music and her songs are still so strong. Their last CD, 2002's punnily titled Loose Screw, is a gem - their best since 1986's Get Close.

Chrissie is great for collectors because she is constantly recording soundtrack songs, charity CD tracks, duets, guest spots on other folks'records. Some of her best songs are from this pirate body of work. The box set does a nice job of collecting her best tunes, but misses many of these rare tracks, perhaps due to legal issues. You can stream a sampler of the new set now.

My Top 10 Pretenders tracks are:

1 Revolution
I love the intricate, rebellious lyrics on this song: "Looking for the grand in the minute / Every breath justifies / Every step that we take to remove / What the powers that be can't prove / And the children will understand why."
2 Don’t Get Me Wrong
Pop classic that reminds me of a happy time in my life.
3 I Should Of
From 2003. God I love this, especially when she sighs "Fuck. I really miss you." Yes, the title is an example of poor grammar.
4 Back On The Chain Gang
A wistful classic.
5 Hymn To Her
Who doesn't love this song?
6 Where Has Everybody Gone? not on box set!
One of their James Bond songs - the barling horns are great.
7 If There Was A Man not on box set!
This should have been the theme for The Living Daylights, not a-ha's song. Her vocals are awesome on it - she is a highly underrated singer.
8 Kid
In my opinion this is the song that most deserves to be covered for years to come. Gahhhh, the lyrics are so fucking sad: "Your eyes are blue / But you won't cry I know / Angry tears, are too dear / You won't let them flow."
9 You Know Who Your Friends Are
Another recent song.
10 Night In My Veins
A hit single about hard fucking on the hood of a car! Love the delirious end: "I've got my head on the curb and I can't produce a word!"

I'd like to post, for one week, a rare MP3 - also not on the box set! -a song that is one of my favorites. It was written for Chrissie by Diane Warren (!) and included on a soundtrack for a movie called The Other Sister.

"Loving You Is All I Know" MP3
Posted by xolondon

Was it Showtime or some other cable channel - Can't remember, I saw it the other day. I cought it in the middle of the show and it really sucked me in. It was called "What we are saying" or something simmilar. Basically a bunch of artists being interviewed and they all give their views of how they approach songwriting and what it means to them and their methods and whatnot. Fascinating show and I must catch it again sometime. Anyway, they were interviewing Goldfrapp and they were asked who their influences were and then the cammera made a turn and there was Ms. Crissie Hynde hanging out with Goldfrapp in their hotel room - It was kinda cool.

Yeah Pretenders totally rock. Even though I only have their collection CDs. :) Their singles are ALL great!

I would not have picked you as a Pretenders fan. Wish I'd seen that Goldfrapp thingy!

My b-day is this weekend and a little birdie told me my daughters might be getting me this... can't wait to dive in!

You know, I just had my bday this past week and I suspect we are very close in age, given your musical taste.

Hope you get this set. I would love to have it, but feel like I need to sell some shit on Amazon first!

I will be 42 - a crusty old fucker who still gets a rush from music!

Same to you! Maybe no one will notice if I say in this post that I am 5 yrs younger. I like to be coy about that ya know!