Morrissey in too deep 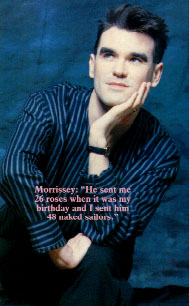 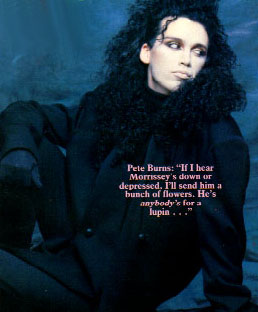 Is he gay or is just an Englishman?

Pete Burns, lead singer of 80's band Dead Or Alive, and newly renaissanced as an attention seeking trannie, is shopping a book he claims spills the deets on an 80's affair with Our Man of Manchester, Morrissey.

In those days, Pete Burns was actually good looking. He was one of those genderfuckers who, like Marilyn, managed to look decent as either sex (bone structure!). So the physical connection is not outraegeous, but the actual relationship seems a bit hard to swallow (heh heh), doesn't it? Wait trolls! This Smash Hits joint interview from April, 1985 is being floated around the web as evidence.

Pete was married for many years, but we now know that was a bit of sham. Here are some choice bits for you to ponder...talk amongst yourselves!

Morrissey said: "Before I met Peter I had a very strange impression of him .... deep down inside, as time began to pass, I began to really concentrate on this specimen..."

Then they met. In a toilet.

Pete said, "Everybody wants him to say he's a clapped-out old drag queen, but he isn't and so he won't say it."

Then Pete says, "It does seem at the moment to be a friendship made in heaven, doesn't it? We had a screaming row the other night -- it was an absolute screamer. I blew my top."

Morrissey concurs: "It was horrible. It was terrible" and later says, "He sent me 26 roses when it was my birthday and I sent him 48 naked sailors."

Though I took those quotes a bit out of context, you need to read the interview! I wonder what Il Mozolini thinks of his old mate now? Stay tuned for a nice recent piccie of Mr. Burns.
Posted by xolondon

The American version of Smash Hits (Star Hits) had this interview in one of their issues. I still have it (somewhere).

Why do you always take me there? :)

Would it be hard to believe that Moz does not have a preference at all?

Other than having fun with the media, I don't think anything went on between the two.

As for Pete, a friend called me up from the bar once to tell me of a video he had just seen there - He's convinced that Pete has had the operation. Patricia?

He WAS a good drag. And his wife looked just like him!