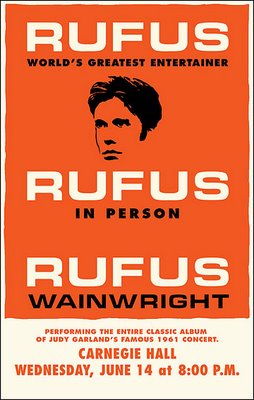 Rufus Wainwright really is an artist who pushes himself. He is anything but complacent. On June 14, he will recreate Judy Garland's 1961 Carnegie Hall concert for a one-time only charity gig. Here is the set list she did that night:

That's a hell of a lot of work for a one-night-only gig! I assume he'll film it. Pity, I actively despise some of these Garland songs. Do you remember the Sweeney Sisters doing the trolley song on SNL in the late 80's?
Posted by xolondon

The Sweeney Sisters!! Yes, back when SNL was really funny! I always loved that sketch.

The only thing that came close to that kind of genius comedy was with Will Ferell and Ana Gestyer doing that high school music duo thing.

Yes the Will and Ana thing was similar. I really liked the super cheesy Vegas phoniness of the Sweeneys, versus the sincere geekiness of the other two.

I have re-used this Sweeney quote in diff situations:

"it may sound corny, but.. there's a word in this business, people. And that word is 'support'. And this gal has given me nothing but, from the get-go, and I mean that, I do."

I was watching SNL in the 80s a special on tv and realized that when I was first watching it circa 1984-5, it was so hit and miss. I had no knowledge of course.

One of my other fav. skits from this era is the hypnotist show and everyone comes out saying, "I loved it. It was much better than Cats. I'd see it again and again." I've used that phrase to one of my friends who has no knowledge of the skit and takes it personally. Sigh. I also loved the Back to the Future take off when Ron Reagan Jr. has to go back in time to make sure his parents meet and his father becomes a Republican. I was thinking of this as I was watching Back to the Future recently.

Not sure of my thoughts regarding Rufus's covering of Judy's concert, but it is at least appropos. I have a taped version of the concert which may have died.

We too say "I loved it better than Cats" all the time at work. ALways in a zombied monotone!