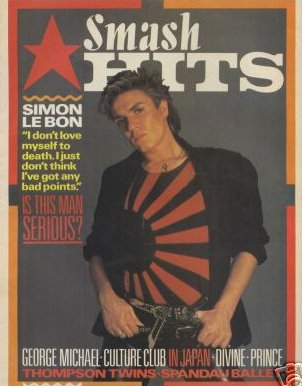 Smash Hits is dead...
and I bet many of the people who read this blog would want to be at the funeral!

I LOVED this magazine. I have vivid memories of buying it in the early 80's; I think there was an American version as well (though Creem was the best of the American mags). This was, for me, the era of Bananarama, Duran, Eurythmics, BowWowWow, Culture Club, Nik Kershaw, Wham -- all the Brits we loved. I don't remember when I first bought this mag - it may have been when I moved to DC in 1984. I've never bothered to buy a new issue when I've been in England - Gary Barlow pics? no thanks! - though I have bought some old mags in Notting Hill (some great old issues of Blitz and The Face, which I've saved).

See PopJustice's Funeral Book! Some of what's written on the link (left) is really cute. Memories of buying the mag at a certain price and what was in the issue. Sometimes being a teenager was fun.

Note: I am not sure that is a real cover. I just had trouble finding one from the era I wanted with an artist I wanted.
Posted by xolondon

Sad - Yes I will attend the funeral. The american version was called Star Hits and I still have all the issues tucked away somewhere in the attic. The first issue had (who else) Duran Duran on the cover. I loved that rag. With it's pull out posters, song lyrics and 20 questions. Off course some of them I have cut out and pasted them onto my journals.

Yeah it was fun buying all this stuff in the 80s when the mags were only about $1.50.

That was my problem - I tore many of them up for scrapbooks. You must rescue yours and seal them tight.

I always think this is the kind of stuff I will want on my deathbed. No deep lit about life and dying, just 80's mags and music. :)