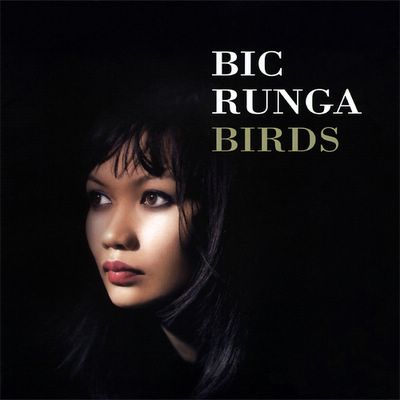 Bic Runga has an amazing new album called Birds, released in New Zealand on Nov. 28 and available on import here. She produced the album herself with a live ensemble. It has a very airy, organic feeling, with Neil Finn on piano and guitar.

Bic, whose real name is Briolette, turns 30 this year. She is the child of a Maori father and a Chinese lounge singer mother. I saw her twice in 2005 and she is tiny, beautiful and sounds just as good live as she does on record. Her voice is crystalline - really pure and always right out front in the mix. I noticed on her website that her last CD went platinum 11 times - isn't that like MILLIONS of sales? She must be the Queen of New Zealand?

Her songs are not the type to immediately grab you...if you give them the time they deserve, they earn their place in your brain. If I knew how to do it, I would post one new track in particular, Say After Me. Carly Simon, eat your heart out: this song evokes both Carly's 70's CD Boys In The Trees and the melodies of Burt Bacharach. It sways in a melancholy way.

Other Birds highlights are If I Had You, a surprising bit of girl-group melodrama (recently mentioned on Tremble Clef), a really moving, atmospheric ballad called Captured and the new single Winning Arrow (see Neil Finn, looking shaggy, in the video on her site). There's even a yokel country track!

Her website has two spots to hear tracks, but Flash prevents me from direct linking. There is an album sampler you can get to from the main page and you can also hear full tracks, including the aforementioned Say After Me on the Listen button at the right top of her pages. I had to download some new Flash player to look at the site, but it was a superquick download that required no effort.
Posted by xolondon

"Say After Me' is really beautiful. Bic actually debuted the song on a live album she recorded with the Christchurch Orchestra, and that more, um, orchestrated version is a little better than the one that eventually ended up on Birds. But it's an amazing song all-around.

I'm a huge Bic Runga fan, I recently been obsessively posting about her on my blog as I want to spread the word. I haven't bought Birds yet as I want to wait for it to be officially released in the UK, but it's awfully tempting to buy an import!