Milla: "I don't know howwww to live with you!" 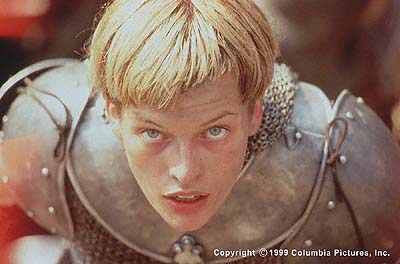 This weekend's MP3 must-have is a classic from the 90's by model / movie star / one-hit wonder / Joan Of Arc wannabe Milla! It's an organic, stringy pop wonder called "Gentleman Who Fell" - do you remember it? I suspect some of you DO. This is one of those insanely catchy songs that is very easy to imitate / mock, but I do love it. She really does have a lovely voice and it surprises me she has not sung in the movies, other than one moment in Dazed And Confused. The hilariously Euro Don't Stop The Pop has the link.

I need to learn how to post songs, because this one brings up a whole mix of one-hit-wonder women of the 90's: Nina Gordon ("Tonight And The Rest Of My Life"), Danielle "Archie!!!!" Brisbois ("What If God Fell From The Sky?"), Vanessa Paradis ("Natural High"), Ingrid Chavez ("Elephant Box")... I could go on.

my cat is snoring very loudly as I type this.

PS: If you have note heard much Sufjan Stevens yet, SixEyes has a massive MP3 / lyrics post. It's sort of like a January Clearance Sale!
Posted by xolondon

I TOTALLY REMEMBER THIS SONG. I was sitting in my apt on 27th street watching MTV LAAATE at night and they played this video. Kennedy came on afterwards and was quiet for a second and then just said "Schpooky".

i remember milla very well as "The Divine Comedy" is one of my favorite albums!

Oh god, Kennedy. That places it in the 90s for sure. It's also featured in the soundtrack for "Rules of Attraction." based (somewhat) on the Bret Easton Ellis novel of the same name. Yes, I get some of my musical likes from soundtracks. Guilty. The movie has the divine Ian Somerhalder in it. (Also seen in Lost.) I do like it.