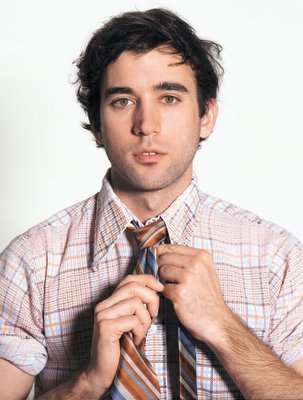 I reckon Sufjan (soofyawn) Stevens is the Parker Posie of the indie rock pop scene. This year's darling. I posted a lot about him in 2005 because he really is one of the most gifted musicians to come along in years. I think his next record will be important because, baby-genius though he is, his work has the potential to become same-y if he relies on the same bag of tricks/ influences. I do love his whispery vocals, rah rah cheers and conplex chamberpop arrangements. The live show was one of the best I saw this year (although I barely saw any shows in '05).

Some of my fave Sujan songs included:

SixEyes is offering a Sujan mix that you should act fast on. Get yer Sufjan Wallpaper too.
Posted by xolondon

you've once again lead me to someone i'm falling in love with. since i was born and raised in michigan, i was drawn to his songs from that cd. his harmonic structure and musical arrangements captured me. i love his voice, too and way with words...i also love brass and have heard a lot of brass in the songs i've heard from him so far...THANKS!

Excellent cunty! :) Be sure to hear "All Good Naysayers." It is free on one of his sites.

V- you know I think the name Sufjan has something to do with some Armenian dude/god type!

Ok, call me crazy, but i don't get Sufjan Stevens. He's one of those artists with whom the press has fallen in love, but other than xolondon, I've never known anyone who actually listens to him... I feel the same way about Bright Eyes... the music just isn't that compelling, yet he's on top ten lists galore.

I don't like Bright Eyes much, but I have never given him a chance. I think Sufjan is amazing and I know plenty of people who like him, so I don't know what to tell ya, mister. We often don't agree. Now, go listen to the Zutons!