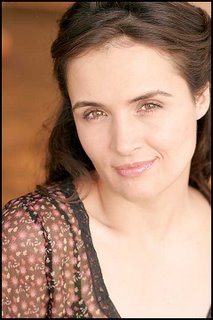 Princess Yum Yum, as I posted three weeks ago, recently filmed a weensy part on Commander In Chief. It airs Tuesday Nov 29, at 9pm on ABC. She plays a reporter asking a question about economics -she thinks the shot will be in the opening segment, so look fast and then you can, as she says, "get back to House."

I am also eager to know if Geena Davis's lips have grown since last week.
Posted by xolondon

You pervy, cottage-cheese-eatin' lurker! You can't have her - I've HEARD she is married to DAVID CASSIDY.

Yes, I was kidding!

Dear Mr. XoLondon
Recently, you stated openly and clearly that the vinceruth is a " pervy, cottage-cheese-eatin' lurker!". Since those comments, you have not come forward with any substantiating evidence of coattage cheese eating, lurking or perhaps more importantly, being pervy. At the May 13th National Conference for Perverted Cheese Curd Perveyors (PCCP), it's President - Ms. Inita Cowkok said directly:

Though many have tried at great length to argue otherwise, there is nothing ambiguous about that statement. For you to state as fact that vinceruth is, was, and always will be pervy or otherwise and thus accuse him of eating any kind of whey remains without substantiating evidence is grossly irresponsible. This is an outrageous slander against people of any & all milk product predelictions and is a sully on their honor.

I would like to know if the members of your, dare I say: "blog" support the direct claims made by you? If so, do you have knowledge of supporting evidence to resolve this matter?

If you do not support such wild and baseless claims, to what actions are you and your minions willing to take to preserve the honor of the men and women who give daily to preserve our right to a deep feeling facisination of all things beautiful whilst lowering our cholesterol?

We need and depend upon a free press, as it is a cornerstone of our American society. But with that freedom comes an enormous responsibility. Irresponsible statements and reporting erode dangerously at the trust we need to have in our blog-whores, and we need that trust now more than ever.

Cheesy-ooglers and bloggy-dirt bottoms alike have earned nothing less than to have the blog-o-sphere police itself against such wild conduct and irresponsible statements from pariahs of actuality such as yourself. While we the peeps may be charged with protecting the very journalistic freedoms you enjoy and we all benefit from, we also need your ilk. We are, after all, your consumers too and we need pithy comments about who is wearing what and what their new (or not so new) sound is like. In short - we need you.

Ask yourself this: Does your recent conduct rise to the level that your readers expect from XOLONDON?

I would greatly appreciate a response at your earliest convenience.

PS - She is not married to David Cassidy and I took her funkytown her last night.

Would you, vinceruth, take a wee XO'S MIDDLE EIGHT test to prove that you are indeed Mr. Yum Yum? Okay, let's begin:

You get all these questions correct and Xolondon will wiggle his... nose... and send Mr. David Cassidy back to his one true love, Ruben Kinkaid.

PS: FUNKYTOWN, troll? I have never heard IT called that!

I am a man of many things to do - many balls juggled but I will be happy to answer this pitiful excuse of an ID Check...puh-lease, Blockbuster Video has a more stringent ID check...

1) Trick Question bee-atch - Mr PYY has done many things toward and untoward at the Roxy but one of the more legal ones is to: Roller Skate (also to keep Downtown Julie Brown from beating up his gay best man, getting a kiss from Madge, and to confuse drag queens with his mother on her 50th...)
2) That would be "Fastlove" by George M - even though said driver was screaming "We're gonna die! We're gonna die" as he navigated through the multitude of pond-like puddles throughout the Virginian countryside...Mr PYY was unfazed by the apparent near-death surrounding him
3) "Frozen" by the aforementioned Madge. He actually danced to quite a few songs that night - Fastball's The Way being one of the first - this all before he ate is Millenium Falcon cake...and after certain peeps were propositioned in the Men's room...
4) PYY has a love of a great many musicians and song-sters. But the one you refer to is Mr. Herb Albert and his Tijuana Brass-ness. One of her favs serve as a soundtrack to our imagined lost luggage from one of our many worldly trips going round and round the baggage carousel as "Green Peppers" plays on & on...
5) Though not a Kate Bush fan by nature, he is one by osmosis - and the word you are searching for is: "I'm Cathy" - or so he's told by PYY who will now not stop singing the whole song, thank-you very much...
6)Lobbying to get Congress to fund Stem Cell Research, Cartman breaks out into Asia's "Heat of the Moment", sending congress into tears...possibly the most serious it has ever gotten. Oh yeah - Kenny really dies in this eps as well...
7) Girls Aloud rock not only the planet but his nightly dreams as well...especially Cheryl & Nadine...together...
8)Though he hasn't come over for a bbq yet, Neil Finn or his legal reps may stop by at any moment to put a restraining order on PYY for following him & his brother from state to state...last seen somewhere in Pennsylvania with another character of possible ill-repute...

So there you have it. Wiggle what you want when you want it - it's your god-given right (unless you're in the UAE http://www.cnn.com/2005/WORLD/meast/11/29/uae.gay.reut/index.html).

None of this changes the fact that PYY is hot & makes a mean meatloaf.

Give David Cassidy my love...

Yes, the Roxy one was a trick question, but I thought you'd say skating first and you did. CHECK. It wasn't the countryside, it was Landmark! Correct though. CHECK. Frozen yes and I think Princess told you the bathroom story b/c I don't think I did. SHUDDER AND CHECK. Herb Alpert. Too easy. CHECK. Bonus luv for spelling Cathy right. I think you cheated, you chee-perv-lurky-loo. CHECK. Cartman was a gift, but CHECK. Even xo does not know which Girl is which! CHECK. Finn, Neil - yes. Pennsylvania? I dunno nuthin 'bout that.

VINCERUTH IS INDEED BETROTHED TO THE PRINCESS. HE IS WHO HE CLAIMS. I TAKE IT ALL BACK. Xolondon bad. VTF good.