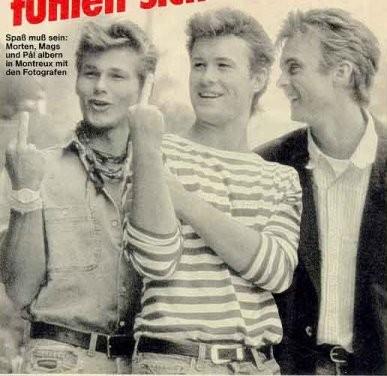 a-ha have a new CD called Analogue on which they promise "dance music for the soul." The single is already on European radio - it's called "Celice" and it's quite good, but nothing new and not at all dancey. If you have not heard their song "Summer Moved On" (from 2000) find it now. It's on their recent singles collection.

Bananarama have a new dance CD out on October 24. It's called Drama and includes production from Brian Higgins (Sugababes, Girls Aloud, Saint Etienne). One single, "Move In My Direction," is already out and the video can be viewed at Arjan. I am not impressed with that track and I should note that Siobhan is still not back with the group. The next single "Look On The Floor" is much better. Here is the website. Cheers then...

The new Simply Red single, "Perfect Love," is truly awful. It's a Latin track that sounds like a Ricky Martin record. Horrific. It's a teaser for Simplified, an acoustic album with rearranged hits and some covers. More info.

Marc Almond is recovering well from his motorcycle accident in '04 - he has been recording a covers album in Manhattan with help from Antony and The Johnsons. I love how these new acts like Antony and Scissor Sisters are hooking up with their musical lineage. Marc also did a remix of "Venus" as a bonus track on the Bananarama album mentioned above.

Cyndi Lauper also must be feeling a little desperate for some sales because she is releasing a record called The Body Acoustic. She too has reinvented her songs with people like Ani DiFranco, Sarah McLachlan and... ??? Kelly Osbourne ??? Meh.

Tracy Chapman has a new album with the same sound and same album cover. I really don't care anymore. (I have also heard on the Velvet Rope that she is not a nice person!) Howard Jones just released a new record and even Samamtha Fox (!) is releasing a new record. 80's nostalgia is out of control.

Oh my gosh... I was just thinking about Marc Almond, because he's one of the people I see echoes of in Richard Hawley (Marc's sweeping songs like "Bittersweet"). I'm glad he's recording again, and more importantly that he's doing better physically. I didn't know about the "Venus" remix either, cool.

Scary about Simply Red. Maybe they're desperate too (like poor Cyndi Lauper).