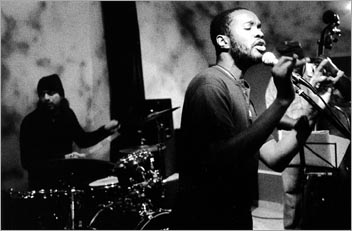 At one poitn a few years ago, McAlmont and Butler began making a new record. Soon it was abandoned so Bernard Butler could run off with former Suede bandmate Brett Anderson.

He made a mistake, I think. The Tears record is a flop and the beautiful voice of David McAlmont has not been heard on record for several winters. On October 29, David will release a new album called Set One: You Go To My Head. It's all covers and the first single is his take on Whitney's "Saving All My Love For You." If you have ever heard David's cover of "Diamonds Are Forever" (for sale here) you know that he is an amazing voice who deserves songs equally worthy, which was not what he always got with Butler. This new CD is great news, though I will have to give handjobs on the street to pay for yet another October release.