This is supposed to be Tupac Shakur. 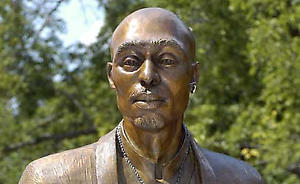 You have to hand it to Tupac's mother. She has managed to release like 10 albums of his work since his death - I think the next one will be some tapes of him hacking up some phlegm in the studio, produced with backing tracks by Dre and Snoop.

The more amazing thing is how she has recomposed history to cast him as a civil rights leader. I have no doubt that many people heard their own lives in his raps, but really...was he speaking for a whole generation? Or more importantly, was he leading a whole generation? Was he an example of how to live?

This statue looks like a 45 year old religious leader! It sits in a - cough!- Peace Garden at the Tupac Amaru Shakur Center For The Arts. Jesus! What utter bullshit! It's as bad as the God Kurt Cobain crap that swirls around rock music.