Off topic: The Cupcake Wars 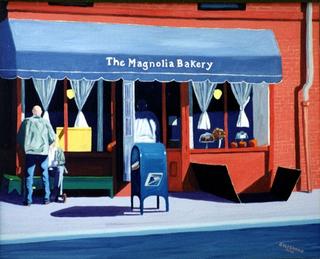 Nice painting isn't it? It's very Hopperesque. There is a hilarious and shocking story in this week's New York Magazine about the fallout between the creators of the Magnolia Bakery and it's various spinoffs, none of which are actually connected to the original, which is news to me. The Wyckoff Correspondent, The Roommate and I went to Buttercup Bakeshop this summer and, while the cupcakes tasted the same, I was unimpressed with the tacky franchisey interior. It had nothing on Magnolia in terms of atmosphere. The funny thing is that both women come across as complete bitches in this piece. Read it and weep (or laugh). I would like to add that I ate 2 cupcakes last night.

Princess Yum Yum, be sure to read this - the cupcakes in NYC sell for 1.75 - how much did you pay in Los Angeles for a cupcake?