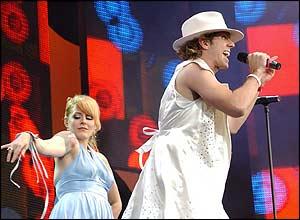 Scissor Sisters appeared at Live 8 in London (pic above) and had the balls to do a new song called "Everybody Wants The Same Thing." It's sort of like Southern Fried Rock Pop with great falsetto vocals at 3:30. Listen to it on Fluxblog.

They have been recording their new CD in New York - has the Wyckoff Correspondent been hanging out in the studio, smoking doobies with Ana et al? Here are the titles of some of their new songs: Can't Decide, Hybrid, Cher Baby, Paul McCartney, Other Side and the aforementioned Everybody Wants The Same Thing. The album is due in the fall and, if it's good, may whisk them up into superstar status. Don't bet against it!
Posted by xolondon