Craig David all over ya 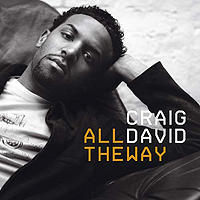 Craig David returns in August with a new album called The Story Goes and a new single called "All The Way."
See the new video here

It's been 5 years since Craig David emerged (as a teenager) from the UK garage music scene, at the same time Coldplay was releasing their first single. Craig hit with two great tracks, "Fill Me In" and "Seven Days" and his debut CD Born To Do It was terrific, especially the classic "Walking Away" (a Bono fave) and "Booty Man" which sounded nothing like you'd guess from the cheesy title. Sadly, as is often the case, David's label rushed a follow-up that was absolute shite. Only 3 good songs on Slicker Than Your Average.

The new single "All The Way" seems frozen in 2000 - do we really need another song about the crew gathering to party? Not really, but it may be a "grower" track - we'll see. Craig's strength in music lies in 3 factors: 1) He is more pop than r'n'b and when he tries to be r'n'b, it sucks 2) He sings without melisma - no crazy caterwauling over the notes in a way that obscures the melody - an American crime for sure - no, he colors within the lines, and 3) He is best at songs with a certain pensiveness or wistful vibe. He's also really good at vocalizing fast, complicated lyrics. Let's hope his new album holds up. Sometimes he tries too hard to be Usher and it's embarrassing. At least the single was done with his longtime collaborator Mark Hill...