The Tears have an uphill climb 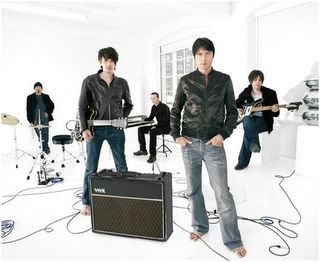 Picture courtesy of The Tears, who will probably send me a nasty cease and desist note for using it.

It ain't 1992 anymore, but Brett Anderson still cares about trashy kids in rainslicked Hounslow streets, sniffing glue and looking glam in a heroin-addled way. The Tears is a spinoff of the fabulous 90's band Suede, a group for whom the term diminishing returns could have been invented. Bernard Butler, second from left, walked out of Suede just prior to the promotion of their second CD Dogmanstar - he seems like kind of a dick, but talented! Suede then released their best album (IMO b/c fans won't agree) Coming Up in 1997 and had a string of hits including the perfect "Trash" and "Beautiful Ones." It's the best Bowie album since the early 70's! Meanwhile, Bernard hooked up with David McAlmont to do a few brilliant singles like "Yes" before he pissed off David, or vice versa. So Bernard was stuck doing some slightly wan solo albums, again with a few good singles, and Suede devolved into, well...unlistenable crap. Now Brett and Bernard have wised up, loved up and made up The Tears.

That is a nice build up to this simple point: the songs I have heard thus far from their new CD are PURE UNADULTERATED SHITE. I refuse to delve further. Maybe I can get it for 99 cents in a few months on Amazon? Loving The Tears would be an exercise in nostalgia really. If you have an alternative view, please share it in the comments, but you'd better give me song titles and reasons. If you are some dillweed from their label, I would be happy to remove the picture and leave up the comments!