Off topic: My trip to the Big Nipple! 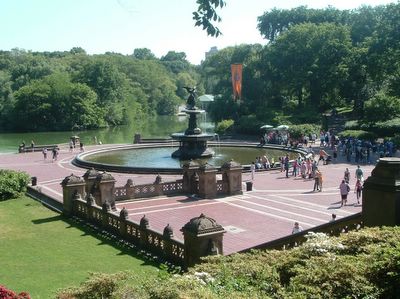 My weekend trip to NYC was really great!

Stumbling into preparations for Alexa Somebody's bat mitzvah, with a pink Hollywood theme, at the Waldorf Astoria. A total OTT event - they had even overtaken the lobby with decorations. How much did this cost? Did the Torah tell them to do this?!

Listening to Killers play live in Central Park without having to pay. We just stayed right outside the summer stage and grooved to my faves, "Mr Brightside" and "All The Things I've Done."

A really delicious pasta lunch at Isabella's on Columbus and 77th Street. The trick is to go to nice places for lunch, thus saving money!

Black and white cookies from Zabar's, bagels from H&H and cupcakes from Magnolia Bakery and Eleni's.

Visiting the beautiful Bethesda Fountain in Central Park (picture above), which played such a prominent and symbolic role in Angels In America.

What I could do without:

The incredible nastiness of extreme humidity and heat mixed with the exhaust-filled NYC air. You need a shower within the first ten minutes of stepping outside. I tell ya it is not good for the pores!

The fact that it's not too damn easy to make a crosstown trip on the subway. If you are on the Lower East Side (the LES to the natives!), it's a pain to get back to the Upper West Side - in my humble opinion.

Changes in the music industry killing off the great 9th Ave bootleg stores like Revolver Records (I liked buying Prince boots there in the late 80's). Not just this, but the general loss of grittiness that appealed to a certain side of me when I was 22.

Not finding the CD of my favorite big-only-in-Russia Swedish band, Bodiess Without Organs. Why the hell can't you get it in NYC? You should be able to get everything in NYC.

The sense that NYC, like so many worldclass cities, is now for the extremely wealthy. I was reading an interview with Jennifer Connolly in the shallow/fab magazine Gotham and she said that she could not afford to buy in Greenwich Village. Huh? An Oscar winning movie star (with a movie star husband) cannot afford it!? Pathetic. What will the proletariat do?!

So we had a terrific time, especially thanks to the Whackoff "Home Of Tara Reid" NJ correspondent who joined us for MoSex and everything else on Saturday. Chin chin!
Posted by xolondon

Unfortunatly, you came at a time when we had JUST hit the 80-90 degree weather! This is when it gets a little sucky for me. I like the winters better.

Glad you had a fun time.

Another great place for bootlegs was St. Marks place. Lotsa tapes.. and Bleeker Bob's and .. well, there were a whole lot of places in the 80s to get bootlegs.