Before I begin, these pics below are not my own. They are from two fans, smurik and jizzyp, on the Ryan message board. More pics here. 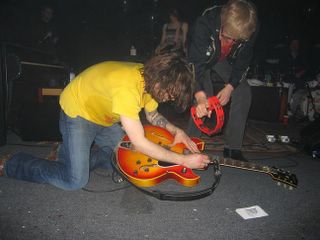 I was really worried that this show on Sunday night at the 9:30 Club was going to suck in a big way. Ryan's show the night before in Philly (details) was apparently one of the worst of his solo career. Angry crowd, angry artist. But his mama musta shook 'im by the ears because he was clearly on his best behavior. He referenced the Philly show several times saying, "We're still open for business, we're still cooking."

Ryan was well-behaved and engaged with the audience in a good way –charming in fact- the whole time. His banter was funny and not too much for my tastes, though I loved when his bandmate boomed “Mr. Adams you digress!” They set up this request box and did an amusing little "skit" to pull the request out. It turned out to be the sad ballad "Dear Chicago" which everyone wanted to hear. He performed it to the woman who requested it, on a stage that was dark except for a string of white Christmas lights wrapped around the mic stand. Really sweet.

His singing was amazing - it struck me the moment he opened his mouth. He is one of those singers, like Lindsey Buckingham, who has the ability to morph his voice into all sorts of sounds, but he sang very clearly for much of the set without histrionics or twangs or croaks that some artists use live and that he apparently used in Philly. The performances were brilliant (inlcuding a fave of mine "La Cienega Just Smiled". He is one of those guitarists who ends up in the corner of the stage on the floor wailing on his guitar, dragging it across the floor so he can get the appropriate feedback.

A few complaints: what artist opens a show with a SIX unreleased tracks? It gets dull at best and it caters to those obnoxious fans in the crowd who scream for each new track as if he's playing "Come Pick Me Up." Puleez. And yes, his extreme ADHD lends to long pauses between songs, as if you're watching a sound check. Still, there was no drunken rage and no idiots screaming for Bryan Adams songs.

Here is a detailed review of the show from another attendee - just scroll down a bit on the thread. 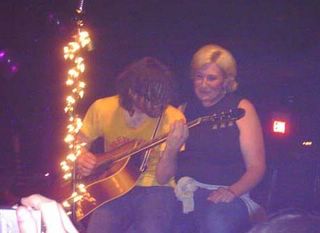 Ryan playing the request, "Dear Chicago" to the fan who wanted to hear it. 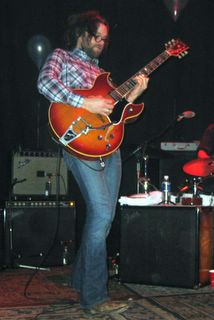 Ryan looked unrecognizable to me in a plaid shirt, long dirty hair pulled back with a barrette on his forehead, low slung tight jeans and boots. Oh yeah, coke bottle glasses!

By the way, for anyone who was there, the whole bit in the beginning about it being "hawt" was Ryan's imitation of the Pat O'Brien tapes.

The setlist: Kiss Before I Go, The End (Jacksonville), What Sin, September, Peaceful Valley, Million Times Pain (title?), Magnolia Mountain, Let It Ride, Blossom, When Will You Come Back Home. 2nd set: Why Do They Leave, Winding Wheel, Oh My Sweet Carolina, To Be Young..., Shakedown On 9th, When The Stars Go Blue, La Cienega Just Smiled, Dear Chicago, Love Is Hell, Please Don't Let Me Go, I See Monsters.
Posted by xolondon