On TV: Miss Marple is back 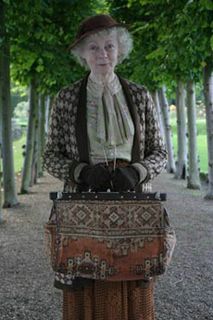 There are new Miss Marple mysteries on PBS' Mystery over the next month. There have been two so far with another two coming, inlcuding the start of a new one tonight called What Mrs. McGillicuddy Saw (the final one is The Body In The Library and more are due next year). I like how they've produced these: loading them with famous Brit actors (so many that they killed off Derek Jacobi in the first hour!) and details not in the books. For instance, I am pretty sure Miss Marple was never seen reading Raymond Chandler's "Simple Art of Murder" and I know she did not have a back story involving an affair with a married soldier.

The woman playing Miss Marple (above) is a wee bit young in my opinion. She seems a bit contemporary compared to the other actors in this series, which is set in the 1950's (I think they were written as 1930s and 40s). She gives a kind of postmodern version of Jane Marple, working the cute old lady when she needs to and giving snarky looks at characters who treat her as anything less than she really is. The musical cues in her scenes are pretty funny as she goes sleuthing around.

PBS knows its viewers and you can tell this series was created with an American audience that wants to see a certain version of English countryside (not that it isn't really verdant green... it IS, even in winter). They are filmed with intense color: for instance, a bright green and yellow room with a woman in a red dress, etc. The town, St. Mary Mead, is impossibly cute (how many locations did it take to make it?!) and Miss Marple's house is a PAINFULLY sweet little thatched cottage with flowers climbing all over it. Pardon me while I make a pot of tea, luv.

Anyway, the schedule is here if you want to watch upcoming episodes. Should you be nutty Agatha Christie traditionalist, this series may set your face on fire, so beware. It even has lesbians! If you are a young hip Anglophile (like MYSELF) you will like it. And remember, the second hour is always better than the first.

More from the PSB Mystery site

Some side notes here:

Marple does mention reading some "American detective fiction" in the first Marple book "Murder at the Vicarage," but she doesn't say what it is. The PBS show makes it clear that she's reading 30s and 40s noir fiction.

The bit about Marple's love life is completely made up. There's nothing in the books about Marple's life (except about her nephew Raymond, who seems wealthy and famous).

In the first book, Marple is said to be "about 70ish". Geraldine McEwan, for all her youthfulness, is 70. Still, I long for Joan Hickson's prim but open-minded spinsterish portrayal and not McEwan's impishness.

I think it's not PBS but Christie herself who made St. Mary Mead and Much Benham into the prototypical little English village. It's probably the truest the series is so far to the Christie books.

Making certain characters lesbians isn't much a leap. Christie implies as much in her books, she just couldn't say it out loud in the 1950s. :)