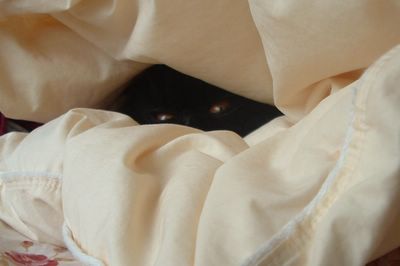 As you can see above, my cat Lucinda is preparing for the new Star Wars movie.

BJORK: The recent Bjork singles for "Triumph Of A Heart" are pretty unbearable. I just got them because I have to have them all and they supports my assertion that Bjork has moved beyond her one-time commitment to pop music. She crossed the avant garde line. Medulla is not a terrible album, but it is extremely esoteric and difficult for my tastes. She was perfect on Homogenic and I hope she sticks to tunes next time (versus production).

JONI MITCHELL: She's released yet another cash cow collection called Songs From A Prairie Girl. She keeps trying to lure me in with fabulous art, especially on this one. The song list is better than the last two, but it still seems indulgent for me to buy, as I have virtually all of the tracks already. Here is a Rhino website (you may have to click on Launch E-card) and a Musictap review

SHAKIRA: The Latina Dick Cozy has a new CD called Oral Fixation, I kid you not. In her "La Tortura" video, Alejandro Sanz butt-bangs her overs a pile of tomatoes and a knife, she sounds like a man, and what she does with her boobs in the video is truly laughable. Just sayin'
Video: Windows High or Windows Low

NEW ORDER has the video for "Jetstream" online now - it's not my favorite song on the CD, but it features Ana Matronic of Scissor Sisters. Video: Windows High or Windows Low

AMERICAN IDOL is officially unbearable. I could not watch last night, they were so bad.
Posted by xolondon