Songs I am listening to this week 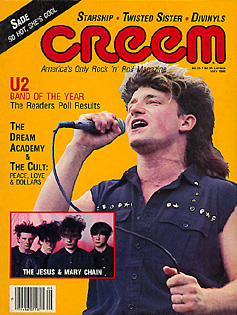 More memories of Creem, this cover from 1985.

Rachel Stevens: Negotiate With Love
Cheesy. Poppy. 80's-inspired. This track makes me hideously happy. One sign of a quality tune is attention to detail: the slide guitar, the lalas, the spoken bits. I also love songs that have a verse sung as if it were one word (about 1:45ish) "Whatisityoudon'tunderstand..." Apparently this single is not doing so well on the UK charts, so I'd like to send out an appeal for Parliament to intervene... Watch the video

Bodies Without Organs: Sunshine In The Rain
This song appeals to me quickly by namechecking London in the first line. The BWO (not to be confused with BTO!) album, Prototype, is all Swede-pop smegma, I admit, but it is done so well. The best pop album since Sugababes' Three, in fact, because the melodies are superb. "Sunshine in The Rain" is the best pop record since... "Negotiate With Love"!! - it should be remixed to become the song of Ibiza Summer '05, in my opinion. Vinny, I don't think there are any remixes, but you should seek this one out. Here a sample

Ryan Adams and The Cardinals: Let It Ride
He's sooo back! I'd prefer to forget the Rock'n'Roll CD ever existed (I knew plenty of people who disagreed with me, so I had them taken care of). I prefer Ryan as alt country and this is just THAT...uptempo alt country pop, sort of like some of the most polished Whiskeytown songs. I have high hopes. Hear it on his website, where I believe they are rotating several songs. The CD cover is bad, by the way, but the website art is cool.

Ben Folds: Time
Ben walked into the wilderness for awhile, IMO, after Whatever and Ever Amen did so well. He started his comeback with his clever EPs and now he has a strong CD to follow-up. The elements are the same: sharp lyrics about life and sing-songy vocals backed by a piano that seems more mature than the artist himself. In this case the topic seems to be the break-up of a relationship: "In time I will fade away / In time I won't hear what you say..." Some nice harmonies on this song too. You can't hear it quite yet (don't ask how I did!), but I will do a post when you can.
Posted by xolondon

Look at Bono and that fantastic mullet. I'm smitten all over again.