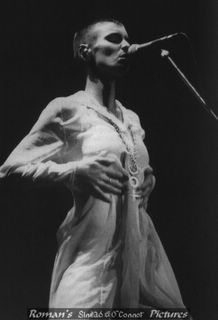 Shirely Manson recently had this to say in GQ about Sinead O'Connor, whose I Do Not Want What I Haven't Got is one of her favorite albums: "I'm so devastated that she's become a figure of ridicule. It breaks my heart, because although she's outspoken and provocative, she's obviously not that tough."

There is, I think, a generation who views her solely as a dingbat. A generation that totally missed the balls-to-the-walls rock goddess who was channeling anger, sexuality, mysticism, political activism, and spirituality - all aggressively - into fucking brillaint rock/pop/folk songs. She had all the ingredients to create a lasting artist and star. Then it sort of went tear-shaped., didn't it?

I recently received the DVD version of her 1990 tour (BUY IT!) and it reminded me that Sinead O'Connor was one of the most talented and inspiring stars of the late 80's. If you watch this show, filmed beautifully by the genius Sophie Muller (who did that new Garbage video I keep crowing about), it presents all the important sides to Sinead: the loved-up sex fiend, the fucked-up wailing banshee, the unlikely Audrey Hepburn beauty, and the voice voice voice. It starts with the personal statement of "I Feel So Different" and covers all the best songs: from "Troy" to "The Last Day of Our Acquaintance" to "I Want Your Hands On Me" to a version of "Emperor's New Clothes" that incorporate NWA's "Fuck Tha Police."

Each song is presented with a slightly different visual look, usually in how it's lit. My favorite is the oversaturated light on "I Want Your Hands On Me" that renders Sinead alabaster with only her red lips and big eyes visible. It's amazing to look at and the performance is a tingler. Be warned though that the DVD also includes a truly crappy, unwatchable earlier concert. Still, it's worth it for the '90 show which was previously released on its on VHS tape under the title Year Of The Horse.

I was about 20 years old when the I Do Not album came out. It was HUGE because of the Prince cover "Nothing Compare 2 U" - as song I tend to skip when I play it. Regardless, it's a near perfect album that, at the time, was a bit of a manifesto to someone my age: "Whatever it may bring, I will live by my own policies, I will sleep with a clear conscience, I will sleep in peace." I think Sinead probably DOES live that way and thus comes across as a bit crazy. Unfortunately, I cannot say I live that way at all. I wish.