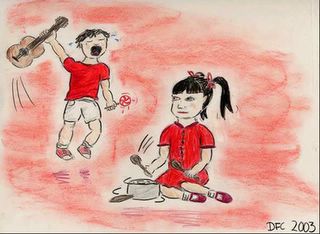 Though I am not a true fan, I wanted to let you hipster trolls know that the new White Stripes single is called "Blue Orchid" and you can hear it illegitimately at regnyouth or via iTUnes. To me it sounds like Led Zeppelin meets 1980's Prince.It has been described as beautiful, though I think that it's sort of ear-bleedin'

MTV did a piece on the new album here

It appears, by the way, that they have actors posing as them on the new single cover on iTunes. Maybe because when last seen, Jack had morphed into a bloated Michael Jackson wannabe. The sweetsy fan drawing above comes courtesy of their website.

UPDATE: What does the album sound like? (courtesy Stereogum)
Posted by xolondon

and a brilliant song is it too. a welcome change and progression from previous stuff.
excellent posts by the way.

Thanks!! And yes, I am surprised how much they do with so little instrumentation.