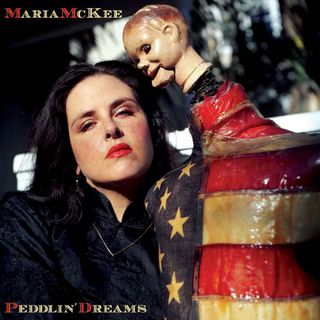 I didn't know it was coming, but Maria McKee released a new album this week called Peddlin' Dreams. Maria's been around since the mid-eighties when her cowpunkfolkcountrypop band Lone Justice was supposed to be the Next Big Thing. They really didn't hit it big, but they made 2 great CDs before Maria launched a solo career. Not including some live/best of discs, I believe this new one is her 5th solo record. Take a look at her website.

How to describe Maria - a pocket-sized Janis Joplin? Not quite. A Pepperdine U. pixie Aretha? Not quite. She is an original and she has lasted this long because of her amazing voice, which can go from fluttery delicate to booming commando, sometimes in one song. I saw her live in the 90's at the 9:30 Club: she was smashed off her ass in a hideous prom gown, but her voice shut the whole place down. Total silence at 9:30 is rare.

Maria's a...dusty diamond! She's traversed numerous genres, but is best suited to an alt-country pop. If you have never heard her, she's had numerous phases, from vaguely Christian country rock on the first Lone Justice songs to U2 anthemic on the title track of Shelter to gospel to Dusty Springfield melancholy 60's trucker music to a slightly ill-conceived jaunt through harder glammish rock. She has opened for u2 and even had a massive European hit with a track ("Show Me Heaven") from freakin' Top Gun in the 80's.

She is a fucking brilliant lyricist and not just in one style. Sometimes her songs are notable for their linguistic wordplay (try the puzzle "Reflected"), but more often they are notable for their directness and warmth. As her career has progressed her lyrics have become more sincere and open, in my opinion.

If you are a fan of people like Ryan Adams, Gillian Welch, Linda Ronstadt, Emmylou Harris or Josh Rouse and you do not know Maria McKee's work, you must listen to her!

Here are my top ten Maria McKee songs (almost all on iTunes):

Buy the new CD or sample it on iTunes
Note that she'll be at IOTA in Arlington (DC) on May 31!
Posted by xolondon