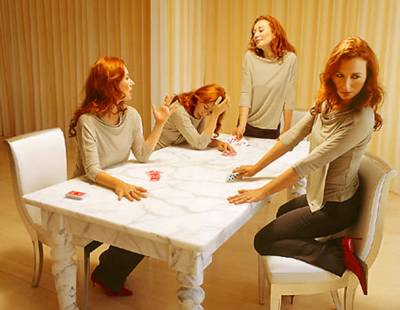 WARNING! DANGER TO NORMAL PEOPLE! This is a very detailed review for the few Tori fans who might see this blog. I have disected this new record like a teen girl with too much time on her hands for writing poetry and making godseyes.

I have been wrestling The Beekeeper, the new Tori Amos album, for a few weeks. It has 19 songs and does not even fit onto a CDR - I had to cut it by one song just to make a copy.

I'll start by saying up front that I intend to do a Harvey Weinstein and cut like 7 or 8 songs to make a decent CDR out of it! I should do that with Scarlet's Walk too, because I think when CDs are too long, the good songs get lost. There are just so many that you can't focus and the whole thing becomes a (midtempo) blur. Tori's too prolific and seems to be shoving what used to be b-sides onto these records, as if she said, in Torispeak, "The girls came to me and I couldn't kick them out!"

Unfortunately, some of the tracks I would cut are probably meant to be showpiece songs, like the soul gospel Witness. Crazy-womyn-Tori-chicks will dig it live, but I don't expect her albums to be doing the "live gospel" thing. In fact, I like none of the tracks where the organ takes a big role. Organs are tacky, faux soul! Like the sax, they should be used sparingly, like certain seasonings. Those songs also have a choir on them (sort of like Way Down on Pele) that's not bad, but the combo of choir/organ is overkill.

Right away, I'd skim off Sweet The Sting, General Joy and Cars And Guitars, the last being a good song with a strange, sibilant vocal - it's shhhlurred in an annoying way, with a weird gutteral voice. There's also some other bullshit, like the girly girl Jamaica Inn - how can you like a song that begins with the line "Can you patch my jeans, Peggy Ann?" ? WHO is called Peggy Ann anymore? I'd also dice the cheesy, if pretty, Original Sinsuality - it reeks of a b-side, especially with the punny title and trite Tori themes.

At first I hated the song done with It Boy Damien Rice, The Power of Orange Knickers, but if you can get through the first 4 lines, it's actually really pretty and develops well. She should have allowed him one solo line, though, as his voice sounds great singing her words.

The fans seem to dislike the single, Sleep With Butterflies, which is radio lite (think Sarah McLachlan), but one of the few songs with a straightforward lyric, about lovers who can't commmit. All the images are of things that escape: balloons, kites, butterflies (or things that just go in circles, like merry-go-rounds). Once you figure this bit out - and I have just done the work for you! - the song comes into focus.

There are some epics here, in length and performance. The title song breaks the monotony with a more spacey, electronic vibe. It's filled with hidden, fleeting micro-melodies in the same way Yes Anastasia was. Barons of Suburbia mines the lonely-ladies territory of Joni Mitchell's Hissing Of Summer Lawns, but morphs into this female power/rage thing. She ends the song by caterwauling "She is risen!" - it's nutty and I pondered cutting this from my CDR, but I'll let "her" live. I DID kill Hoochie Woman and those same crazed Tori girls would lynch me for that. It's jaunty and funny but is still ungood.

Martha's Foolish Ginger is a very nice song with a vaguely martial beat, but the opening line betrays the laziness of the writing: "Take a walk down memory lane with me." If I'd written that line in college, there would have been some red ink on the page. I do like this song though, despite this trifle.

There are some 10,000 Oceans-ish songs on here: songs that are strong the first time you hear them - notably the final ballad, "Toast," a sad, saaaaad song to someone who has died (actually her brother). File it under the same wintry ballad category as Gold Dust or the more perfect Putting The Damage On. Another song, Ribbons Undone, is a sweet ballad clearly meant for her daughter. It reminds me that Tori could just cut loose and make melodies for the masses if she wanted to. This one isn't so obtuse and has some pretty images like "She's a rose in a lily's cloak."

What TBK is missing: a song like Taxi Ride (from the last record), an uptempo that's a little different in style for Tori. Something complex, but totally accessible and quickly thrilling. A song that keeps popping lines at you over time ("Even a glamorous bitch can be in need"). There's a few trakcs that are classic Tori including Parasol, Marys Of The Sea, and Goodbye Pisces, the latter a trip through "Little Earthquakes" imagery ("bull in a china shop" for one). It's nice - think Tear In Your Hand '05 - but it doesn't have any spikey urgency. It's just...tinkly.

In sum, The Beekeeper is just too much of everything, but not enough of the specific. Buy it and - it's an iTunes generation- burn your own version. Tori has self-produced her records in her little Cornish spaceship for years, and this has probably saved her from some trendy traps, but she needs to EDIT. Regardless, take what good music you can find in the world and remember to - I'll say this in Tori Speak - let the girls grow, so you can figure out which ones you like, which ones are cheap lays and which ones will grow up to be leaders.
Posted by xolondon

I just read this, since it was linked to your post on the new Tori album. Wow! Though we disagree in a few patches about which songs to kick off, you have put words to all of my feelings about this album. Thanks!