Note to Esther: Your religion ain't lookin' so good 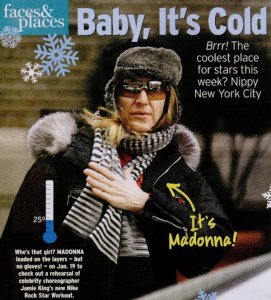 There is about to be a big article in Vanity Fair about the Kabbalah Center - the group Madonna is assocated with in LA. Some of the article will probably be true and some of it will probably be sensational, but I will reserve judgement until I read it. What I will do now is focus on something that is direct from the Kabbalah Center - I've been suspicious about the water thing for awhile. First look at this claptrap regharding the tsunami: A Message from Yehuda Berg. That is potable water, not portable water sir! Also note the fine print: We have made it our goal to raise up to $1,000,000 to package, ship and distribute Kabbalah Water and Zohars to those in desperate need of these healing items.

What does this mean? That the cash is soley for dispersing the water? That they won't be giving any of the cash? That it will cost a million to send the stuff or, worse, the cash pays for the water? It is unclear and suspicious. Personally, I don't blame them for wanting to send bottled water, that's okay, but Zohars? Are those life saving at this moment? I had to look them up to find out that they are books with Kabbalistic theories/teachings. Is now the time to get all religious? "You can have a bottle of water if you take this Zohar and learn about our religion." Of course, all religions tend to want to recruit at times like this - the Christians are certainly some of the worst about this.

A fucking infomercial sunk Cher's career in the 1980's. Madonna needs to answer about this stuff before damage to her credibilty rubs off on her career, IMO.

PS: Remember trolls, I am not the person you want to totally slam Madonna on. I'll get cunty. The fact is that people like to simplify Madonna down to the most base qualities. Some of those may be true, but who really knows? I would like to believe she stands for good and that she is (despite being naive, pedantic and sullen!) sincere.
Posted by xolondon