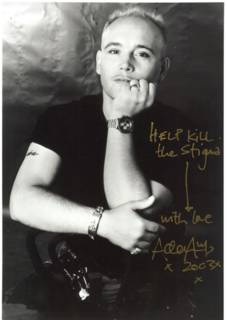 Adam is a keen supporter of the College's anti-stigma campaign and wants more famous people to talk openly about their experiences of mental health problems. Adam recently featured in a Channel 4 documentary in which he talks openly about his manic depression and being stalked. So please watch this space and support Adam in campaigning against discrimination and
stigma.

Poor Adam. Did you know he went crazy over the past few years? Has he had another bender since this picture? Methinks fame was just what his mind needed! Anyway, a strange ad, though the list of supporters on this site is a Who's Who of British Fabulousness (it includes Joanna Lumley, Mike Leigh and Ruby Wax!).
Posted by xolondon