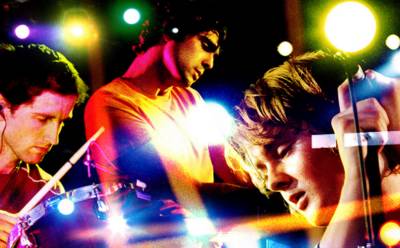 Every January I think that this will be the year that no great new music comes along. 2004 started this way and dragged on until mid-May when I bought this Keane record while on vacation in London. I had heard the single Somewhere Only We Know months before. While I liked it, I mentally wrote it off as Travis redux and focused on Delays as the next British thing. Boy was I wrong!

My friend Sheryl calls lead singer Tom Chaplin a "hobbit" and she is right. But we like hobbits and we love Tom's voice, which is devoid of irony, angst or feigned disdain. It's smooth, creamy and, most all of, sincere. Their debut CD Hopes And Fears was the most melodic record off 2004 - one beautiful song after another. At first the tracks seem samey, but play it a couple of times and they start to bloom individually. They also brought back, along with Morrissey, the Art of the B-side: tracks that were as good as, if not better than, CD tracks.

So I loved them and then September came when I fell in love with them. Though some folks thought their stage show was, well, stagey, it totally worked on me. Tom Chaplin is a star. Cannot wait to hear how they follow up such a great record!

Key tracks: the whole fucking record, though I pick Your Eyes Open and This Is The Last Time ("you fall on me for anything you like") as the best.

I have been blatherin' about Keane since May: