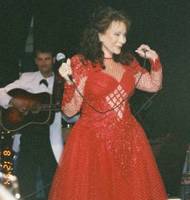 It's my first Cameo Blogger, Joanna, with her picture and comments on the Loretta Lynn concert last week in Atlanta:

She was everything I knew she would be and 100x more!! It was so great!!! She was so funny and fabulous. Her assistant Tim makes all her dresses - she wore this fantastic "Loretta" dress - the same as the one on the Van Lear Rose album cover except in red.

This venue we went to is way out in the country on someone's farm. You park in the grass and sit on folding chairs on sawdust. It only seats about 500 people so there is not a bad seat. During the first three songs you are allowed to line up in the middle aisle and go up to the stage and take pics and give gifts to the artist. That's how we got the great pic of her.

She told people to call out what they wanted to hear and she played a lot of it. Of course she ended with "Coal Miner's Daughter". The best part was she was so conversational. You never felt like it was the same shtick you would hear at all her shows. She is such a hoot! I know I can't stop gushing but seriously, she was so amazing. She is 70 years old!! Saturday night was a dream realized for me. I just adore her and she did not disappoint.

"Portland, Oregon and sloe gin fizz, if that ain't love then tell me what is!" - Miss Loretta and Jack White

Have mercy on me baby!