Where is Bitchin' Gwen walking to?

She's walkin' to the bank to check on her cash money and jewels! 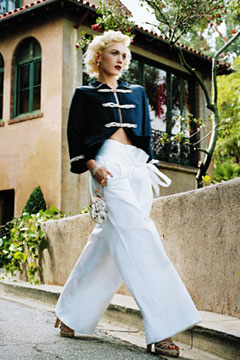 I've heard Gwen Stefani's new song "What Are you Waiting For" several times now. At first it caused an involuntary icky face because it's a bit...chaotic. Now it has grown on me. If this song doesn't go to No. 1, I don't know what will. It's an amalgamation of numerous 80's girl pop singers - little bits of homage to Nina Hagen, Cyndi Lauper, Toni Basil et al. Gwen's artistic forbears! The title refers to her nervousness about doing a solo record (listen closely for the "Take a chance you stupid ho" refrain). She shouldn't be nervous - she is a big star now and is only going to blow up bigger. Who's got it all? Bitchin' Gwen!

Anyway, for a good interview with Gwendolyn, check out this Vogue article.