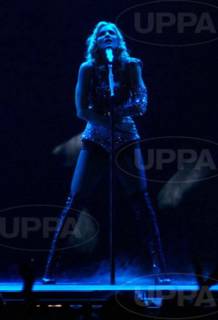 Tomorrow night is the end of Madonna's best tour...IMO...FYI. It will not be shown on TV after all, so if you missed it you suck! In her honor, here is a confusing tech-head article about her show. Apparently, if Esther decides to be spontaneous (gasp!) and talk longer than she usually does between songs, the whole production goes into technical chaos and has to be taken offline or the video stuff will start while she is talking. At least she does sing live...