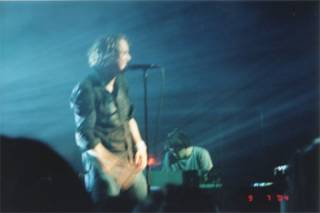 Last night I went to see Keane at the 9:30 Club. The evening had a rocky start as they were over an hour late hitting the stage - on a "school night" it matters more for an oldie like me! A cheesy HFS guy came on and announced they had been stuck in Manhattan doing Conan O'Brien's show and had to fly back (in the storms) on a private jet. Well, boo fucking hoo. It's amazing how much good will disappears after standing in place for an hour waiting, knowing a band is late for a live show because they have been on fucking TV in another city.

So, finally they roll on at like 11:15 with a brilliant light show and BOOMING sound. Mind you this band is just a keyboardist, a singer and a drummer. No guitar, no bass. Can't Stop Now is the opener and ALL IS FORGIVEN in moments. By the time they hit the "emotion keeps my heart running" part I had goose bumps. An absolutely amazing performance and completely worth the wait. I had no idea what a muscular sounding show this would be.

I was also surprised at Tom Chaplin, the singer. In the video he appears as an overgrown child, apple cheeked and doughy, but he is well suited to the stage. Constantly in motion and working the long curly hair. The incredible "backlit" light show is perfect for snazzy rock star silhouettes, though he didn't "over pose." The keyboardist, Tim, was a riot- like he was playing for Motley Crue with the constant headbanging. Schroeder (sp?) gone MAD.

IT WAS GLORIOUS. This is the album of the year for me and one of the best shows I've seen in a long time. There were several "misty" moments (Your Eyes Open) and a number of singalongs like the single Somewhere Only We Know. They did their full album because, hey, they only gots one!

I urge anyone to see them when they can, though I think they only have one American show left in Boston.

thank you to one of the forum fans for her (don't know her name!) photo, taken a few weeks ago at another show.
Posted by xolondon

Sorry I missed this one. If I had heard "Your Eyes Open" I probably would have lost it though. Just hearing that on CD makes me weepy!

hey, i wandered on your site & wondered if you saw the show...i am in agreement...slow start on the school nite thing but well worth the wait! i guess i'll scroll up for further comments...