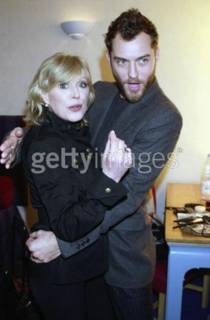 Marianne Faithfull is hot and tough. This is, after all, a woman who once sang:

Oh, big grey mother, I love you forever / With your barbed wire pussy and your good and bad weather / Why'd ya do it, she said / Why'd you do what you did ...

She's got a mega new CD coming out on 9/27 called Before The Poison. I will try and post a song sample soon. It still saddens me that the week I first went to England (in 10/95) Marianne played here at the Birchmere. I could have been so close that I might have sat in her lucious bosom. She probably wouldn't have minded, though I am not Jude Law, who she is seen canoodling above (Jude is lucky. I know that Jim C. would "hit it" if given the chance, age be damned!).

A self-absorbed writer from the Guardian did a pretty nasty piece about her in 2001, but it's worth reading. Marianne is bitched out, neurotic about sex and somewhat controlled by a drunken lover/ manager named Francois. She says she's glad she doesn't have to have sex with strangers, which is ironic since her 2002 single (a collaboration with Beck) featured the chorus, "It's time for sex with strangers." Here is an unflattering description of the moment the writer first sees Marianne:

Marianne, in a black mac and fishnet tights, is sprawling with her legs wide apart, her black satin crotch glinting between her scrawny 55-year-old thighs, doing sex kitten moues at the camera...

After playing on her last record with Beck and Jarvis Cocker, Marianne has moved on to a new crop of worshipful (and talented) younger musicians. The list of songs and songwriters for Before The Poison is impressive:

I can't wait for this! It can be ordered now at Amazon.uk (cover pic on this link too)