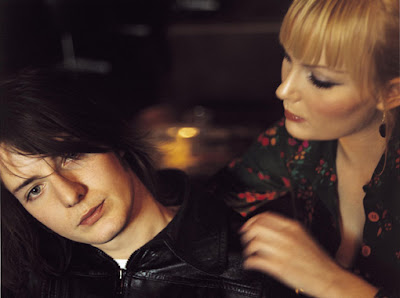 A duo. He British. She Icelandic. Both sing and aren't they cute? To me this group is, to quote the articulate Neil Sedaka (then speaking of Clay Aiken), "ear delicious." The Honeymoon describe it this way:

"The songs are gentle because they're like a one on one dialogue. You wouldn't scream into someone's ear if you're sitting close to them...It's like sexy, Sunday music."

Passive Aggressive is the kind of gorgeous modern music I picture Sofia Coppola listening to while sipping a Tazo Peach tea in her backyard. I Don't Know What To Say is a little airier and reminds me of something from the 70's, but I cannot pinpoint.

What's really amusing is that the 3AM Girls - gossip queens in London - chatted them up in their column last week. The record, which will most likely make my Top Ten of 2004, is called Dialog and came out out on July 12 in the UK only. Pffft.
Posted by xolondon

Email ThisBlogThis!Share to TwitterShare to FacebookShare to Pinterest
Labels: Honeymoon

I thought that "ear delicious" quote was by Mike Tyson!