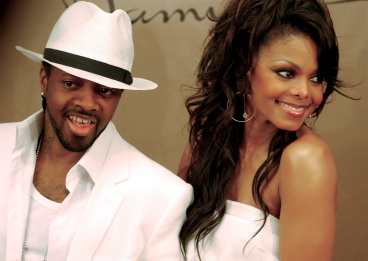 Janet. And her little dog too

Update: This review is the meanest thing I've ever written. I was so disappointed with Damita Jo that I went postal. She deserves better, but then, so do her fans.

Everybody knows that I love pop music and treat it with the same passion and critical ear that I would any other type of music.

Janet Jackson has always been a really solid pop artist. Her CDs between 1986 and 1993 were perfect. Now, post nipplegate, when Janet should be seeking to regain credibility, she releases the weak Damita Jo. Poor J-Ho seems to have fallen victim to the same Diva Curse that afflicted Madonna, Mary J. Blige and many others recently. This CD is a bunch of underbaked midtempos and finger-snap-beat sex ballads that sound like rejects from her superlative '93 Janet. CD.

Her usual lame-o interludes are here, of course. Last time it was between-take Fran Drescher imitations and this time it's faux interviews about her personal history. A last-minute attempt to string this record into some kind of autobiographical narrative? This would be fine if you were a HOOKER and your life revolved around giving head in parked cars. How many Janet tracks do we need that give her explicit instructions on the oral arts? Especially if said "head" belongs to jheri-curled maestro Jermaine Dupree? Blech.

Yes, the new single I Want You is somewhat of an Alicia Keys ripoff, but it does have a lush, carefree sweetness. I particularly like the "have your way with me" bridge, which is a tasty come-on, but not dirrrty. There are maybe 4 other tracks worthy of Janet, All Nite among them, and the rest is craven drivel. Bring back Jam and Lewis with Janet in Minneapolis.

This week's new group choice is Delays. Note that is not The Delays. This group is sweet. Very atmospheric, with perhaps the best CD title I have heard in a long time: "Faded Seaside Glamour" (how Morrissey is that?)

Play the sample on the link above. I like "Long Time Coming." It's all boys, but you wouldn't know it. They're vaguely REM-like.

This page has some news clippings at the bottom

Email ThisBlogThis!Share to TwitterShare to FacebookShare to Pinterest
Labels: Delays I am afraid to say that Patience requires some.

George Michael's new album is in sore need of editing. Like most CDs today, it's too long - there are 14 or 15 songs and most are about 6 minutes long. This record sounds like the studio creation of a man who has not set foot outside his house in the past 5 or 6 years (apparently too busy rolling doobies). It has a very airless, studio-sealed quality; the arrangements don't breathe the way they did on Listen Without Prejudice. They are grooves more than songs. Having said that, George adds several brilliant tunes to his "canon" (!).

Amazing is not, but it's better than Madonna's song of the same name. It's a sweet, midtempo pop love song that would sound great on radio, if they'd ever play it. Precious Box is one of the best songs GM has ever written - a bit of social commentary about pop culture / media in the new century. It would have sounded truly contemporary in 2001, but it's still propulsive and hooky. Great for night driving.

My Mother Had A Brother, about George's gay uncle killing himself the day George was born, is deeply personal - a message to his dead mother and uncle. It's also one of his finest ballads. The whole album seems quite initmate: there are happy memories of his Wham! days (Round Here) and learn-from-me warnings to a younger generation about self-respect (the excellent Cars And Trains).

Despite the presence of the previously released Freek 04 (which sounds just like the crappy Freeek, but should have been called "Freeek93" it's so clunky and dated), the worst song is American Angel - the cheesiest gay love song ever recorded. It's for George's Texan boyfriend and it features gushingly bad lines like this:

Through all of those battles then you came
Stepped out of the fading light
Said, “Baby I'm American, dry your eyes again,
Because I'm here to save your life”

Thank you, Lord God King Bufu. I wish I could say I loved this CD. GM's voice sounds terrific, but most of the songs are just a little bit dated, without being classic. In fact they're bloated,a little like GM's tummy.

You can hear Amazing on GM's Sony site and 30-sec samples of other tracks.
Posted by xolondon No comments:

Seems like he's taken quite a leap with this record. According to my music pal Lisa, his last solo records were unlistenable noise / noodlings. This one is chock full of strong melodies, Cali alt-pop-rock arrangements and surprisingly good singing. It's a wee bit too long- 19 tracks, including some instrumentals, that could have been cut by about 4. The details are there too: the sparing use of vocoder on The Slaughter intro, the strong vocals on Carvel and the lovely eat-your-heart-out-Richard-Ashcroft lyrics / music of Ricky. The sound of the CD is reminiscent of the very good 2002 RHCP record By The Way - minus their lingering funk and occasionally irritating Anthony Keidis raps.

His website has three full tracks including the aforementioned epic Carvel (as in ice cream cake!) - a freaking amazing driving-around-California-in-a-convertible song. That may end up in my top ten songs of the year, at least at the rate we're going so far. Just click on the Play Music cloud on the main page.

I'd been so uninspired by music lately... until this. I urge you to check it out!
Posted by xolondon No comments:

My first ever blog. May be a complete failure, so I am starting in secret. I will be the only reader! Anyhoo, the point is for me to share my thoughts about music and -eventually- hear what others have to say.
Posted by xolondon No comments: