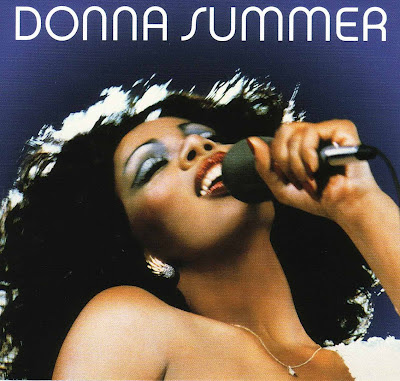 Scene: Big Shanty roller rink, Kennesaw, Georgia, 1979. I am rolling around in circles, no more than ten years old, when Donna Summer's single Dim All The Lights comes on. The song has a hazy, laid back intro - it sounds like a ballad - but then she hits this endless note at about :38 seconds in and it revs right up into heaven. I close my eyes and just glide along, transported away to some future I did not yet know.

The grand irony of pop music is the notion of disco/dance music as lesser, “lite” music. She loves you yeah yeah yeah is fine, London Calling is fine, but the orgasmic 17 minutes of

Love To Love You Baby is not. This is history rewritten. Follow the timeline and you’ll see that disco was, in its own way, a rebellion (against punk music), except that the punks in question weren’t white. The disco denizens were black, Latino - not yet merged into “Blatino” - and largely gay. I am not the first to note that, before Andy and Liza took over Studio 54, disco was the sound of the disenfranchised. Donna Summer was unapologetically - for awhile, anyway - their queen.So when people lump together Siouxsie, Chrissie and Debbie as the pop punks of their day, that’s not giving Donna Summer her rank. I think it was pretty rebellious of Donna to release a song that sounded like she was getting fucked twenty-five ways to Sunday on the studio floor, don’t you?There wasn’t a hit-maker disco diva before Donna Summer. She was the pioneer, albeit one with a lucite cane and an orchid in her hair. Diana Ross, bored with her Michael Masser ballads, followed Donna, as did Streisand. Without Donna, there would be no Beyonce and, without Donna, Madonna would not have justified her love. Donna had a vision too, whether it was concept albums about the seasons or female archetypes, the hooker or the waitress.You may not be old enough to know that disco so enraged straight white men that it drove them to burn records in stadiums. Seriously! Were these sports fans/rednecks trying to kill a subculture by burning gays, blacks and Latinos in effigy? I won’t go there. Donna Summer is much loved by many for creating music that set them free.If you looked at me at 21, you could argue that I - white, middle class, male - didn’t ever need to be set free. In the early 90’s, I was out with my friend in a beat up old car (Cutlass Salon!). When we returned home, the opening part of Last Dance - the dewy “oooh ooh oohs” - was coming out of the boombox on the front seat. With one foot on the pavement, I said “Oh wait, I love this song. We can’t get out of the car yet.” So we listened to Donna: “I need you beside me, to guide me…” Then the beat kicked in and we just got out and danced beside the car. I’m sure someone driving by was like, “Oh, Jeeeeesus, what a fag.” Why do I care? I’m free too.One of my favorite Donna songs, I Love You...

and Dim All The Lights

This post contains elements of a 2008 review I did of Donna's final - and excellent - album Crayons.

sums it all up perfectly! great read

So well put. I was just a kid about your age when Donna's music entered my life, and it really changed everything I thought was good about the music I had been listening to. Her music was an outlet to be open to different kinds of sounds that the Brits of the 80's would spread around the world. Listen to the Bad Girls album and hear disco, rock, electro, ballads, even a little country. With Donna, there were no boundaries, and unlike others who threw their talents away when celebrity came calling, she kept producing good material well into the millennium. LaDonna Gaines will be HUGELY missed.

This is a perfect & fitting tribute, thank you for writing it. I was talking to someone the other day who said they hated disco. Someone admittedly much younger than me so they probably never heard it the way I heard it. I was a teenager in the 70s & I grew up on this stuff. Loved Donna. Love her still. So underrated.

Well written, but "enraged straight white men"? yeah disco got a lot of backlash and hate near the end of its heydays and was big with the gay crowd, but disco was really popular with 'straight white men' for a time as well.

Agree with everything, what a great post! RIP Donna.

There was something about the pop music Donna recorded that transcended categories. It's hard to explain, but it's as if the song itself is much greater than the sum of its parts. Part of that credit goes to the producers, but I big chunk of that is how Donna lifts a good song off the ground and gives it wings to soar. Huge loss.

Excellent post! And a very keen observation of the way that disco and Donna Summer's legacy have been marginalized. It is interesting to note that almost every other song on the radio today is 'disco'-rooted. Donna Summer lives!

Thanks to all for the comments. I have the 17 min version of MacArthur Park playing as I type!